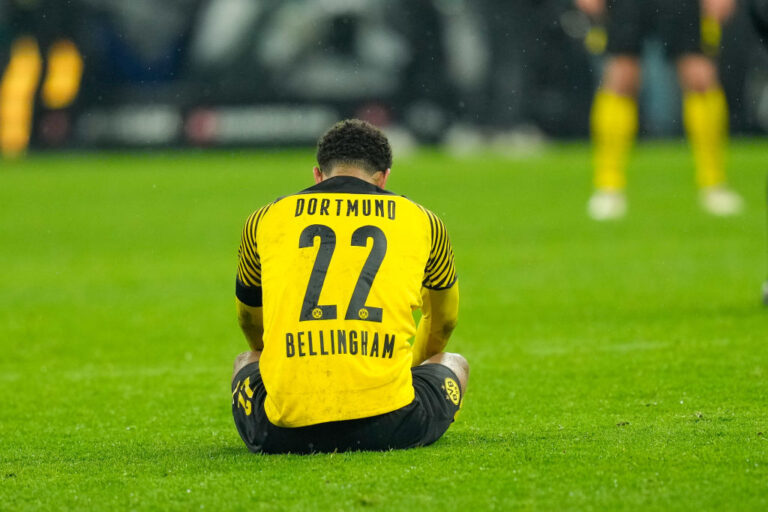 Jude Bellingham has made a name as one of the top young talents in world football, all whilst wearing a unique shirt number. So, why does the England midfielder wear number 22?

Since breaking the Birmingham City record for youngest-ever player at 16, Bellingham’s rise in the football world has been astronomical. After just 44 appearances for the Championship side, the midfielder sealed a £25 million move to German giants Borussia Dortmund. He became the most expensive 17-year-old in history as a result of the transfer.

A regular fixture in the German side’s starting XI, Bellingham has continued to develop as an excellent box-to-box midfielder. He has played 90 times for Dortmund, scoring 10 goals and providing 18 assists.

But aside from his stats, Bellingham’s overall play continues to impress. He works tirelessly, providing an engine that keeps the team moving in midfield. Additionally, his technical ability bodes well for competing against the best in the world for years to come.

After showcasing his raw talent in the Bundesliga, Gareth Southgate picked Bellingham for England’s Euro 2020 squad. However, the then 17-year-old only made three substitute appearances as England lost in the final.

Despite the disappointment, Bellingham still made history himself. When he came on against Croatia in England’s opening group match, he became the youngest ever player to feature at the Euros in history.

But why 22? The reasoning for Jude Bellingham’s shirt number comes from his days back in Birmingham’s academy.

Birmingham’s head of academy, Mike Dodds, was the man who revealed the reason why. Speaking to talkSPORT, Bellingham’s former coach recalled the conversation that gave the midfielder his own number.

“He [Bellingham] would have been about 13 or 14, and like most boys that age, they want to be a number 10,” reminisced Dodds.

“And from the age of 13 onwards, he has held onto that all the way through, and you can see that in his game.”

Add four, eight, and 10 together, and you get 22 – inspiring the choice of digits.

The conversation clearly transformed Bellingham’s way of thinking, and he has stuck with it. When he made his debut for Birmingham’s first team, the youngster had 22 on his back. In the player’s honour, the midlands side even retired the shirt number – meaning that Jude was the last player to wear it at St Andrew’s.

Following his move to Germany, he picked the same squad number at Borussia Dortmund.

His all-around ability as a complete midfielder is a testament to Bellingham’s versatility. Who knew that the play style of Jude Bellingham was influenced by a simple shirt number? It is a brilliantly unique reason, that’s for sure.