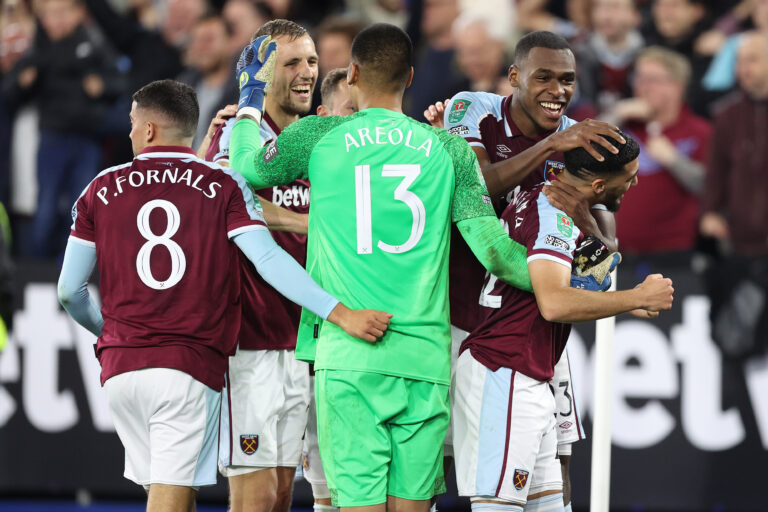 Another round of this season’s Carabao Cup has been and gone, with some thrilling games having taken place over this week.

The headline news from Round Four is that Manchester City – who have won the last four iterations of the Carabao Cup – have been knocked out after a 5-3 penalty shootout defeat to West Ham United.

Said Benrahma scored the winning penalty to send the Hammers through. David Moyes‘s side are into the hat for the quarter-final draw for the first time since the 2017/18 season.

Second half goals from Takumi Minamino and Divock Origi saw Liverpool into the quarter-finals as they defeated Preston North End 2-0 at Deepdale. North End had chances in the first half, with Adrian saving well from Brad Potts and Sean Maguire. Minamino struck from close range just past the hour mark, before Origi scored with a sensational heel flick to double their advantage.

North London rivals Arsenal and Tottenham Hotspur also ensured their place in the draw for the last eight. The Gunners defeated Leeds United 2-0 at the Emirates Stadium, with goals from Calum Chambers and former Leeds loanee Eddie Nketiah. Spurs, meanwhile, edged out Burnley 1-0 through Lucas Moura’s second half header.

Another penalty shootout was required to separate Leicester City and Brighton and Hove Albion, with the scoreline ending at 2-2 after a pulsating 90 minutes. Harvey Barnes put Leicester ahead, before there were two goals in first half stoppage time. Seagulls defender Adam Webster scored the first of them to level the scores, before Ademola Lookman put the Foxes back ahead. Enock Mwepu then equalised once again on 71 minutes to set up the shootout, which Leicester won 4-2.

Brentford made it seven Premier League teams in the quarter-finals as they won 2-1 at Stoke City. Goals from Sergi Canos and Ivan Toney put Thomas Frank’s side two goals ahead at half-time. Romaine Sawyers pulled one back for Stoke on 57 minutes, but Michael O’Neill’s side couldn’t find an equaliser.

Meanwhile, Sunderland secured a penalty shootout victory over Queens Park Rangers in the only all-EFL tie of Round Four. After the game finished 0-0 in normal time, Lee Johnson’s side scored all three of their penalties to win the shootout 3-1.

The quarter-final draw for this season’s Carabao Cup will take place live on Soccer AM this Saturday.

Make sure to check out the EFL’s official website for ticketing details and more ways to follow your team in the Carabao Cup quarter-finals and beyond!