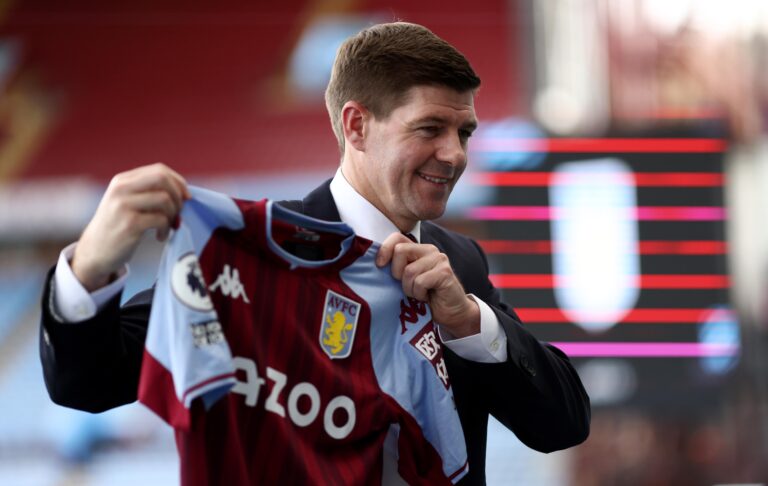 In his first press conference as the new Aston Villa head coach, Steven Gerrard has outlined the club’s aim of securing European football in the long-term – but did not put a date on achieving that ambition.

His first game in charge of the club is against Brighton and Hove Albion at Villa Park on Saturday.

Speaking in a press conference before the game on Thursday morning, Gerrard explained (via The Athletic): “Success in football is always about winning football matches, first and foremost.”

“Long-term, the club would like to be back on a European level, I don’t think now is the right time to put any date on that. For me more importantly, it is about focusing on the short term, which is Brighton at the weekend. We need to start winning football matches again.”

When did Aston Villa last play in European competition?

Aston Villa last played in a European competition over a decade ago. They qualified for the play-off round of the 2010/11 Europa League but lost to Austrian side Rapid Vienna on aggregate.

They had qualified for the same competition a year prior. However, Villa exited at the same stage and to the same opposition.

The last time the Villans played in a European group stage proper was in the 2008/09 UEFA Cup. Under the management of Martin O’Neill, they progressed through the group stage after wins over Ajax and Sparta Prague. Villa would eventually drop out of the competition at the last 32 stage, losing on aggregate to Russian giants CSKA Moscow.

How many European trophies have Aston Villa won?

Aston Villa have won a total of three European trophies throughout their existence.

The most recent of those came in 2001, when they were one of three champions of the Intertoto Cup. The competition provided an additional three teams for the upcoming season’s edition of the UEFA Cup.

Villa are one of five British teams to have won the European Cup/Champions League. They won the 1981/82 edition of the competition when it was known by its former name.

Tony Barton’s side defeated Bayern Munich 1-0 in the final. Striker Peter Withe scored the winning goal in the second half.