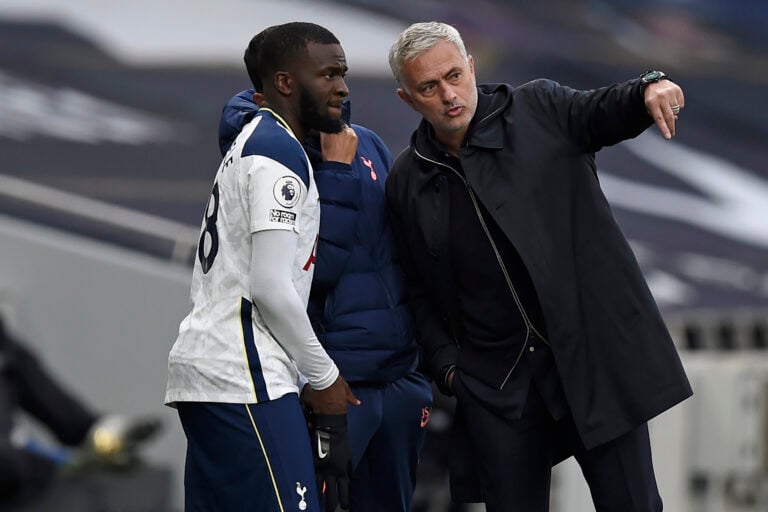 Tanguy Ndombele has said that his relationship with Jose Mourinho at Tottenham Hotspur was “hard” to begin with – but got “much better” over time.

Ndombele was Tottenham’s record signing when he was brought to the club from Lyon under Mauricio Pochettino in the summer of 2019.

He scored on his Premier League debut in a 2-1 win over Aston Villa. The Frenchman made 14 appearances in all competitions for the side before Pochettino was sacked by the club in November 2019.

But he suffered from a groin injury during much of Mourinho’s early period in charge, and struggled for regular game time when fit.

Ndombele was then substituted at half-time during his side’s 1-1 draw against Burnley in March 2020. Mourinho criticised the Frenchman’s performance post-match.

He said: “He’s a player with great talent. He has to know he has to do much better and know I cannot keep giving him opportunities to play because the team is much more important.”

It looked as if the midfielder could leave the club that summer, but after excelling during Tottenham’s 6-1 victory over Manchester United last October, Ndombele then went on to become a vital cog in Mourinho’s midfield.

Now he has spoken out about his relationship with Mourinho and how it developed over time. He also compared the Portuguese boss’s style to his successor, Nuno Espirito Santo.

Referencing Mourinho’s comments after the Burnley game, he said (quotes via the Daily Telegraph): “I am quite happy for people to tell the truth like that about me. That type of management, I’m fine with. Sometimes it works and sometimes it doesn’t.”

“It is true that it was hard at the start with Mourinho but then, over time, we got on much better and the relationship worked much better.”

“With any manager, if I don’t like how I’m treated, I’ll say so. At the end of the day each manager is going to have their own style. Jose Mourinho is someone who has a hard style of management, but he’s always about the club. But Nuno is a really nice guy but he’s a bit quieter and keeps himself to himself. They’re two very different people.”

Spurs are next in Premier League action on Saturday when they host Manchester United. They currently sit sixth in the table, with 15 points from nine games.