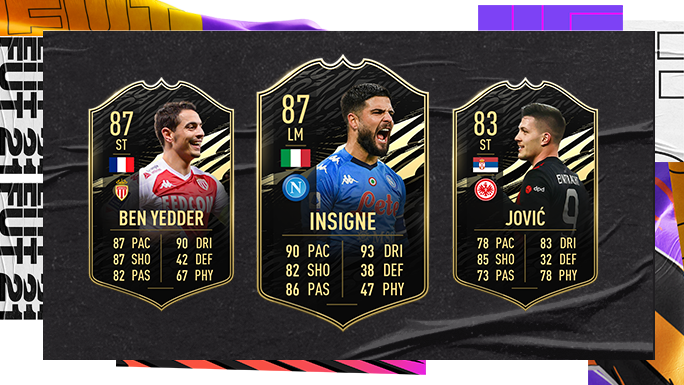 We’re a matter of days away from this year’s version of Team of the Year, but first up is Team of the Week 17 and it’s stacked!

Containing 4 cards with 87 or above overalls, some great options for red picks and an improvement for a Headliner card – this TOTW shapes up to be one of the better ones from recent weeks.

Here is the Team of the Week 17 in full:

With 23 cards in total, it’s hard to whittle it down to our top 3 favourite cards but here’s our best shot at it:

My favourite striker to use in Ultimate Team with a return of 240 goals and 189 assists in 256 games, the Monaco striker is back with his 2nd IF this FIFA.

For those with his Headliner card, well done. He’s going to be boosted to 88 rating with a potential for a 89 rated Ben Yedder if Monaco beat Marseille on Saturday.

Following his amazing goal against Sheffield United at the weekend, the Spurs midfielder gets in TOTW17 with a +3 boost to his overall rating.

His pace and physical goes up by 4 with passing and dribbling boosted by 3, this card could be a very cheap beast for a Premier League side.

Another player with a 2nd IF this year, the AZ Alkmaar midfielder is very close to joining the Rudd Gullit gang.

With the influx of very good Eredivisie cards in recent weeks, this could be a good addition to your club, especially if you stick an Engine chemistry style on him to improve his pace and dribbling to boost his agility and balance.

One to keep an eye on for Team of the Season as he could be a monster.

Other cards to mention are the obvious Paul Pogba, Lorenzo Insigne and Thomas Muller cards, who are all high rated and could be good for Icon SBCs if you don’t want to use them in your team.

A quick mention for John Stones, who gets in after his 1st Premier League goal for Manchester City. If you missed out on his Player Moments SBC card, sticking an anchor chemistry style will nearly match those cards and you save yourself some coins!

What do you think of TOTW17? Let us know on Twitter, @SPORF!

We’ll also have all the latest Team of the Year news this coming Friday from 6pm so make sure you’re following us across social media!