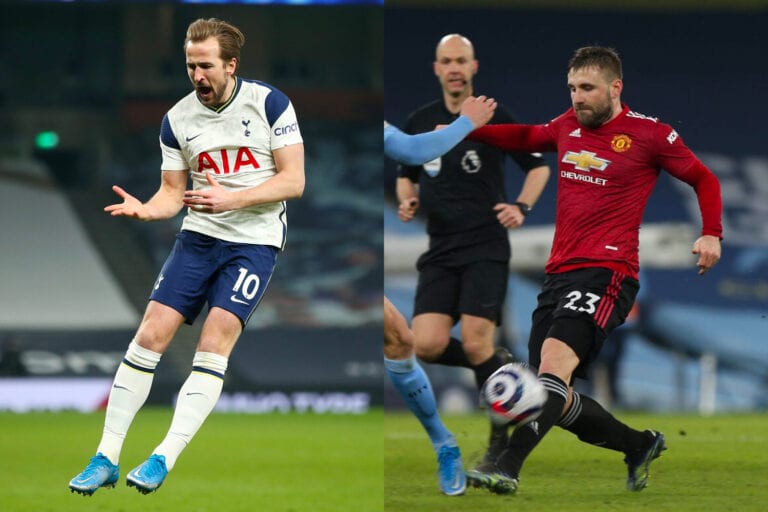 Tottenham striker Harry Kane could be set to headline Team of the Week 24 after his dominant performance in his side’s 4-1 victory over Crystal Palace on Sunday.

The 27-year-old scored twice and assisted the other two goals for Jose Mourinho’s side. It was the second consecutive week that Spurs have recorded four goals in a match.

And whilst it was his team-mate Gareth Bale who received an in-form card last week, it should be Kane who is handed a stats boost this time around.

It would be the second time the England forward has featured in TOTW on FIFA 21. He also has a Rulebreakers card.

Below are five other names that could feature alongside Kane in TOTW24:

Luke Shaw had a tough task against the in-form Riyad Mahrez in Sunday’s Manchester Derby, but did an excellent job overall defensively.

He also scored United’s second goal in their 2-0 win, which started with a surging run forward from the left-back.

The 24-year-old was awarded the WhoScored man of the match with a rating of 7.7, which could earn him a place in Team of the Week 24.

The Piemonte Calcio of the real-life football world could be due to receive another in-form card after Alvaro Morata put in a top display at the weekend.

Morata was in top form, scoring twice and assisting the other goal as Andrea Pirlo’s side recorded a much-needed victory.

Antonio Conte’s Inter quickly responded to the Juventus result with a 1-0 win over Atalanta at the San Siro on Monday. It was their seventh consecutive Serie A victory.

Milan Skriniar scored the only goal of the game on 54 minutes, earning himself the WhoScored star man award with a rating of 8.8.

In Monday night’s offering of Liga NOS action, Benfica kept pace with the top three with a 3-0 victory at Belenenses.

Central to that triumph was left-back Alejandro Grimaldo. The Spaniard provided two assists and was given the WhoScored star man award.

Ex-Paris Saint-Germain academy graduate Christopher Nkunku enjoyed another fine afternoon on Sunday. He scored and contributed an assist as Leipzig won 3-0 at Freiburg in the Bundesliga.

The Frenchman has now contributed six goals and four assists in the league this season.

He was also named in the Sportschau Bundesliga team of the week, alongside team-mate Kevin Kampl.