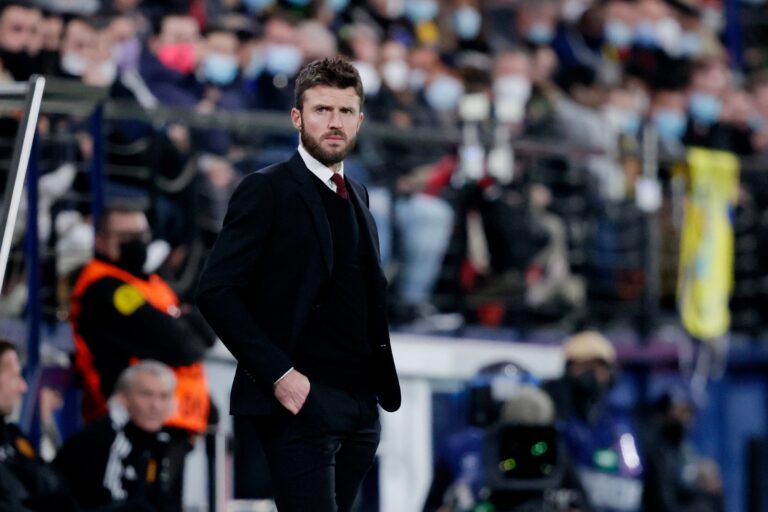 The victory guarantees that United, currently on 10 points from five games, will qualify for the knockout stages as winners of Group F.

Cristiano Ronaldo and Jadon Sancho both got on the scoresheet for the Red Devils. The latter opened his account for the club in his 15th appearance in all competitions since signing from Borussia Dortmund.

Yet all eyes were on Carrick, who took temporary charge following the sacking of Ole Gunnar Solskjaer on Sunday. The former United midfielder delivered – with one of his own coaching principles standing out on the evening.

How does Michael Carrick coach players?

Speaking in an interview with the Football Association in 2020, Carrick revealed how he coaches elite players.

As well as understanding individuals and having a clear observational focus, Carrick also emphasised the requirement to stay calm on the touchline.

He explained: “When my kids see me on the bench on matchday, they say: ‘Dad, do you actually do anything? Because it looks like you’re not doing anything’. But I’m quite calm, I’m not one that jumps about and gets too over excited, but inside I’m obviously desperate to win.”

“I played like that in some ways, where inside you have that stubbornness and a real drive, but on the outside, it all seems quite calm and sometimes emotionless – until we score a goal or something that triggers me. Mostly I’m more focused on the details and putting the right things in place.”

“As a player, I didn’t get so high or down so much; it was trying to keep level. I think that’s important as a coach and as a manager to try and do that and to try and help the players be the same.”

How Michael Carrick put his principle into action

During the victory over Villarreal, Michael Carrick was a picture of calm on the touchline. That was even during times of adversity.

United put in a solid display in the first half but were by no means on top. David de Gea was called into action twice and made an excellent save to deny Manu Trigueros on 28 minutes.

But the visitors were able to weather that storm. Carrick made two half-time changes, with Marcus Rashford and Bruno Fernandes entering the action.

United took the lead on 78 minutes through Ronaldo. It was then Sancho’s turn to add his name to the scoresheet, putting the finishing touches on a counterattack to seal the win. One of Carrick’s substitutes, Rashford, provided the assist.

Carrick quickly went over to the number 25 to congratulate him on his performance after full-time. For the United interim manager, it was a job well done on what was undoubtedly the most significant evening of his coaching career.