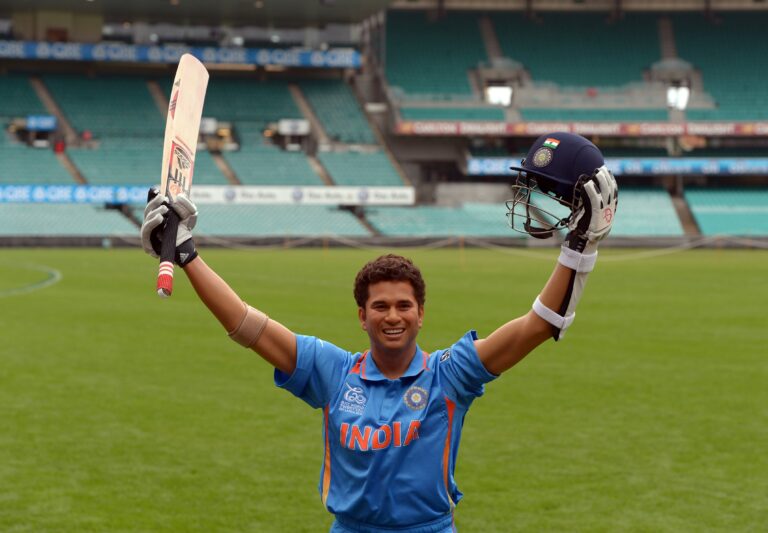 On November 16, 2013, Sachin Tendulkar left the cricket field for the final time as an India player at international level.

Tendulkar ended his international career with over 34,000 runs in all formats, with nearly 16,000 being scored in Test cricket.

He recorded precisely 100 centuries in international cricket – the first and, to this day, the only player to achieve that feat.

He ended his career after Test match number 200 against West Indies in Mumbai. The location of his final Test was fitting – Tendulkar was born in the city of Bombay, which later became Mumbai in 1995.

When did Sachin Tendulkar announce his retirement?

The 40-year-old was set to end his career as the highest run-scorer in the history of Test cricket. Having scored a total of 15,921 runs, it is a record he still holds today.

Tendulkar had previously already retired from ODI and IPL cricket. He posted 49 centuries in the former at an average of 44.83 and was part of the World Cup-winning India side in 2011.

Upon announcing his retirement, Tendulkar said: “It’s hard to imagine a life without playing cricket because it’s all I’ve ever done since I was 11.”

“All my life, I have had a dream of playing for India. I have been living this dream every day for the last 24 years. It’s been a huge honour to have represented my country and played all over the world.”

What happened in his last Test?

Sachin Tendulkar strode to the crease with his team two wickets down, and 105 runs behind West Indies’ first innings total of 182.

The 40-year-old went on to hit 74 off 118 balls, an innings that contained 12 fours. It looked as if Tendulkar might be able to achieve a dream century in his final Test, but unfortunately, it was not forthcoming.

Tendulkar was caught at first slip off Daren Sammy to end what proved to be his final Test innings.

Forced to follow on, West Indies could not cumulatively overhaul India’s first innings total of 495. Fittingly, Tendulkar’s career ended with a win – and he was even given two overs with the ball late on in the match as well, although he didn’t end up with a wicket.

What was the reaction of Sachin Tendulkar after his retirement Test?

Understandably, there was an emotional feel surrounding the occasion after Sachin Tendulkar went into international retirement.

The ‘Little Master’ would no longer appear in an Indian shirt at international level. After 25 years, the career of India’s most beloved cricketer was over.

Tendulkar explained in a press conference after his final Test (via India TV News): “It hasn’t struck me yet that I have retired; still, I feel I will play.”

“24 hours after 24 years of cricket, I need a break of 24 days now. It was the perfect time to retire as my body was unable to take the load. It has been a dream journey for me for the past 24 years. Many challenges came my way, but my family and friends helped me in finding solutions to the challenges.”