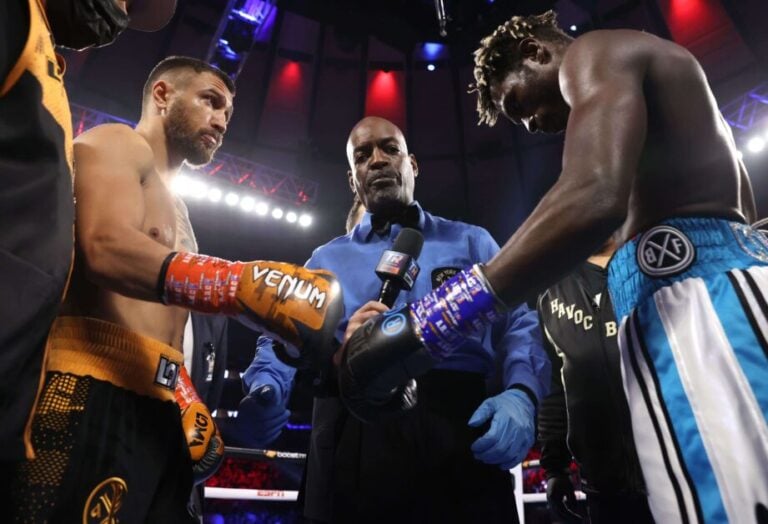 Vasiliy Lomachenko returned to his mesmeric best as he cruised past Richard Commey in one of his career-best performances.

Following his loss to Teofimo Lopez, some felt that maybe the 33-year-old’s best days were behind him. But that certainly didn’t seem the case against Commey.

The Ukrainian looked almost out of this world as he used his remarkable footwork to glide past the heavy punches of his opponent and land his own in return.

Commey is not an easy challenge for anyone, and the Ghanaian is a former world champion with monstrous power. But Lomachenko was too good for him.

The fight started at a frantic pace as Commey attempted to bully his smaller opponent. That worked for a few rounds, but slowly but surely, the boxing wizard downloaded his rival’s data and began to take over.

His punches were landing easily by the seventh round, and it seemed the end was coming. Then in a break off the clinch, the shot of the fight landed.

A thunderous left hook detonated on Commey’s chin, and the 34-year-old tumbled towards the canvas. The boxer rose to his feet in an impressive display of heart, but Lomachenko didn’t want the fight to continue.

He shockingly signalled to the opposite corner to pull their man out. We don’t know whether this was coming from a good place or not, but it was certainly an iconic moment.

Commey’s team declined, and ‘Hi-Tech’ decided to try and end it himself. He began bludgeoning the courageous ex-champion with a barrage of shots. Each one looked like it could be the fight ender.

It seemed that the African may have weathered the storm, but another left hand sent him stumbling towards the ropes. His legs had clearly gone.

Once again, Lomachenko, more aggressively this time, implored Commey’s team to stop the contest. But they had no interest in listening to his demands.

The Ukrainian smelt blood. He knew this was his opportunity to end the bout. Remarkably, however, his opponent wasn’t done. The power-puncher courageously began throwing back, and somehow he survived the round.

The momentum of the fight remained with Lomachenko throughout the contest. He dominated the rest of the action en route to a unanimous decision victory.

A teary-eyed Commey apologised for letting his country down in his post-fight interview.

But he didn’t disappoint them. He showed an inspirational amount of courage, and boxing fans will never forget his desire to win.

What is next for Vasiliy Lomachenko?

In this fight, Vasiliy Lomachenko proved that he’s still one of the best on the planet. Therefore, it can’t be long until he gets another shot at becoming the undisputed world champion.

Lopez was recently defeated by Australian underdog George Kambosos, who welcomes a fight with ‘The Matrix’. However, if Lomachenko wants that fight, then he’d have to go Down Under.

This won’t deter the all-time great. The Ukrainian has spent his entire career away from his native country. If Kambosos wants the contest, the legend will surely answer his calls.

He may be slightly past his prime, but Lomachenko still has so much left to offer. His skill level is far beyond anybody else in the division, and maybe the motivation of achieving his ultimate goal will help him put in one final big performance.