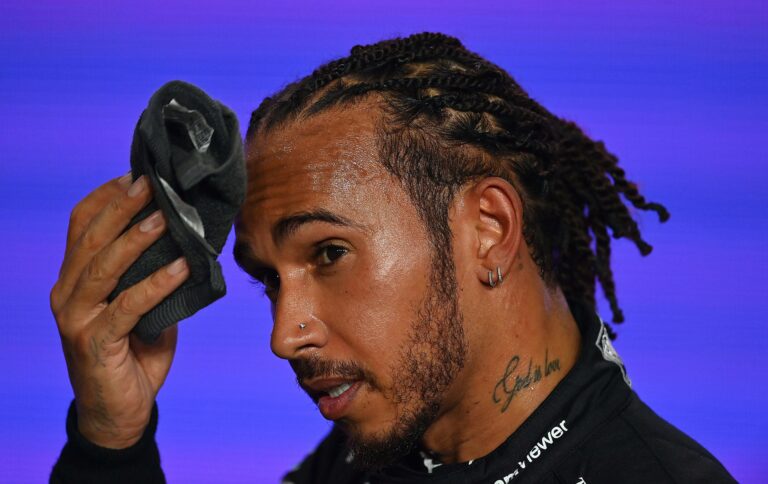 Lewis Hamilton and Max Verstappen are gearing up for one of the most anticipated Formula 1 world championship battles in years on Sunday.

The Abu Dhabi Grand Prix will be the host of the final race of what has been an incredible season. Verstappen and Hamilton go into the Grand Prix locked on 369.5 points each.

If both men end the race level on points, Verstappen will win the title by having recorded more wins than his title rival this season.

Read: Verstappen vs Hamilton: Six races that have defined the Formula 1 title battle

It would be the Dutchman’s first title. Hamilton, meanwhile, is looking to secure what would be his eighth world championship. If he does, he will break the record of seven set by Michael Schumacher.

The Brit won his first title back in 2008 while racing for McLaren. The championship battle went to the last race that season and ended with some incredible drama. Let’s take a look at what happened:

Lewis Hamilton went into the final race of the 2008 season at Interlagos, Brazil, knowing that fifth place would be enough to guarantee him his first Formula 1 world title.

He had been here before. A year earlier, at the same track, Hamilton had needed a fifth-place finish to beat Kimi Raikkonen and Fernando Alonso to the world championship in his rookie year. However, he lost places at the start of the race and then suffered a gearbox problem that dropped him down to last.

The Brit recovered to finish seventh, but it wasn’t enough to stop Raikkonen – who won the race – from taking the title.

Standing in his way a year later was home hero Felipe Massa. The Brazilian was having the season of his life. He had won five races, a figure which could have been six had an engine failure not forced him to retire from the lead in Hungary.

Massa did precisely what he needed to do in Interlagos. He put his Ferrari on pole position and, despite changeable conditions, led the vast majority of the race and won. It was now down to what Hamilton could do.

Hamilton’s battle for the title

It wasn’t an easy race for Hamilton and McLaren. All weekend, they had failed to match the pace of Ferrari and Fernando Alonso in the Renault.

Another stumbling block in the race quickly emerged in the form of Sebastian Vettel. With drivers starting on the intermediates, when everyone switched to dry tyres, the German and Alonso were second and third behind Massa.

But both cars were lightly fuelled, which meant they dropped down the order later. With 15 laps to go, Hamilton was in fourth. Despite fifth-placed Vettel closing in, there was a big gap to sixth place. Then things changed.

The rain begins to fall

The other stumbling block for Hamilton turned out to be the weather. He and Vettel pitted for intermediates on lap 66 with the rain falling. Toyota’s Timo Glock, however, had stayed on dries and jumped up to fourth. Hamilton was fifth, ahead of Vettel, but knew one mistake could cost him.

That mistake came on lap 69 of 71. Whilst trying to lap Robert Kubica, the Brit slid wide on the final corner, which allowed Vettel through. With Glock still posting competitive times on dry tyres, all hope of the championship began to fade.

There was one lap to go, and Massa was in prime position to win his first world championship at his home track.

But the rain got heavier. Glock’s Toyota began to struggle for any sort of grip, and he quickly fell back into the clutches of Vettel and Hamilton. His last lap time was around 20 seconds slower than the time he posted on lap 70.

Massa crossed the line first, and the Ferrari garage erupted. They thought their driver had done enough.

But they hadn’t accounted for Glock. Whilst the German driver desperately tried to drag his car to the finish on the wrong tyres, Hamilton was closing in.

At the final corner, the McLaren driver made his move down the inside and secured that valuable fifth place. Hamilton had won the world championship by one point. F1 fans had never seen a championship conclusion like it.

What happened in the aftermath?

An emotional Massa stepped foot on the podium after coming so close to what would have been his greatest Formula 1 achievement.

He told reporters after the race (quotes via Reuters): “I had completely mixed emotions because by the time I had crossed the line, I was still the champion and then suddenly my engineer was telling me everything on the radio.”

“He told me when I was already in turn three that Lewis had passed Glock. It was a completely mixed emotion because I was still waiting to hear the confirmation [of the title] and then we didn’t have [what we wanted].”

“We need to congratulate Lewis because he did a great championship and he scored more points than us, so he deserves to be champion. I know how to lose and I know how to win and it is another day of my life from which I am going to learn a lot.”

Hamilton, meanwhile, was left to soak in what had been the most incredible race of his F1 career.

It was a stunning achievement. In 2009, however, the McLaren was not competitive in the first half of the season, meaning the Brit was never in championship contention. He won his next title in 2014 with Mercedes and has won six of the last seven world championships.

Massa started the 2009 season in promising fashion but then suffered a skull fracture in Hungary. A spring from Rubens Barrichello’s Brawn car flew off and struck the Ferrari driver on the head, knocking him unconscious and causing him to hit the tyre barrier at high speed. He was airlifted to hospital to undergo surgery and placed in intensive care.

He thankfully made a full recovery and lined up on the grid for the 2010 season. However, he would never again come as close to winning the world title as he did in Brazil in 2008.