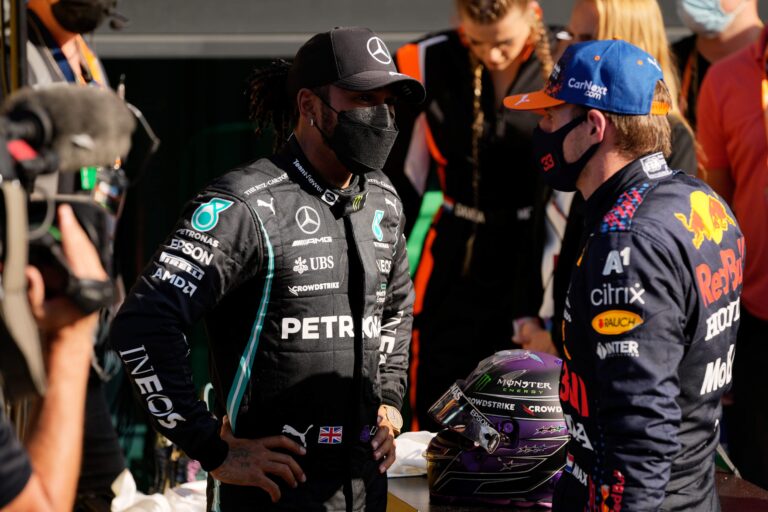 The Formula 1 world championship battle between Max Verstappen and Lewis Hamilton comes to a head in Abu Dhabi this weekend.

The pair have been neck and neck in the title race all year. With just one race remaining in the season, both Verstappen and Hamilton are level on 369.5 points.

Should both drivers end up level after Sunday’s race at the newly-reconfigured Yas Marina Circuit, Verstappen will be champion. That is because he has nine wins to Hamilton’s eight.

Verstappen is aiming to win his first world title. Hamilton, meanwhile, is looking for title number eight. If he achieves that, he will break the legendary Michael Schumacher’s record of seven.

Read: Formula 1 world championship: What are the title permutations?

The stakes could not be higher. It is all set to be a cracker.

Both drivers had to participate in the obligatory pre-race press conference before the action gets underway. Each of the 20 drivers does press duties before every race weekend, in groups of two.

Unsurprisingly, Verstappen and Hamilton were paired together. The first question posed to both drivers was how significant winning the title would be.

Hamilton replied: “We’re in some unmarked territory as a team. With the year we’ve had, I’m sure so many people would have ruled us out being this close right at the end. I think it’s been an incredible group effort from everyone back in the factory and at the track.”

“No-one’s ever done eight [world championship wins] before. I feel grateful. I remember what it is like going for your first, so I’ve had those experiences and the rollercoaster of emotions that you go through.”

Verstappen said: “It’s been really enjoyable. I think after last year, I didn’t have a lot of hope that we would be sitting here.”

“From the start [of the season], we were very competitive. We had some good results, a bit of bad luck as well, but overall we can be really proud of the whole team effort to be sitting here and fighting for this title.”

Verstappen and Hamilton have been involved in several incidents on track this season.

Read: Verstappen vs Hamilton: Six races that have defined the F1 title battle

In the British Grand Prix at Silverstone, the pair collided at Copse corner on the first lap. Hamilton was given a 10-second penalty for the incident, but bounced back to win. Verstappen, meanwhile, was forced to retire.

In the Italian Grand Prix at Monza, both men crashed again. Verstappen was deemed “predominantly to blame” by the stewards and was handed a three-place grid penalty for the next race after a collision caused him to land on top of Hamilton’s car.

Finally, there was also a significant incident in the Saudi Arabian Grand Prix last weekend. Verstappen was forced to give up first place to Hamilton on lap 37 after both drivers went off at turn one.

He then slowed down considerably on the penultimate straight. However, the Brit had not been told that his title rival would let him through, and drove into the back of him. After the race, Verstappen was given a 10-second penalty.

Verstappen on relationship with Hamilton

Verstappen was also asked about his relationship with his Mercedes rival – and whether it had changed as a result of what has happened in 2021.

He replied (quotes via Daily Telegraph): “Yes, very much so. And not in a positive way.”

On the Saudi Arabia incident, he went on to add: “Clearly only I was wrong somehow. Other people do exactly the same thing and get nothing. Both of us were off the track into turn one, and somehow they [stewards] judged it to be my fault. That I don’t agree with.”

Formula 1 is gearing up for perhaps its most exhilarating title finale since 2008, when Hamilton overtook Timo Glock at the final corner of the last lap to secure enough points to win what was his first championship.