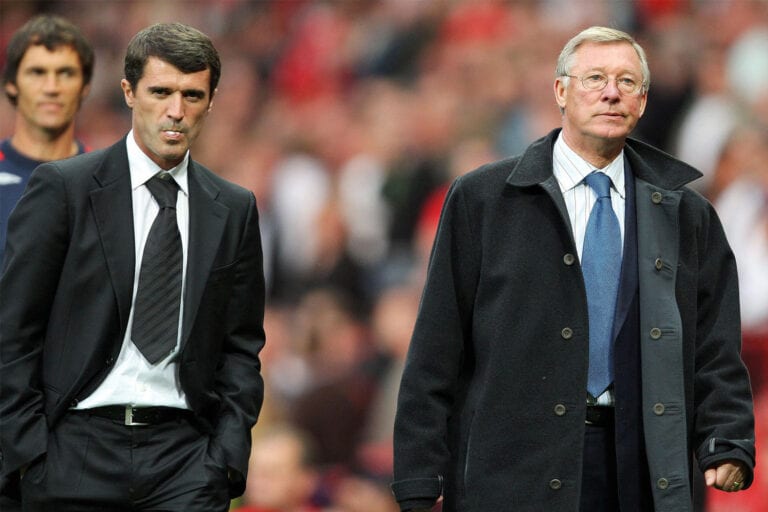 Roy Keane‘s departure from Manchester United by mutual consent was announced in November 2005, after 12 years at the club.

The Irishman featured in United’s first five league games at the beginning of the 2005/06 season, including a hard-fought 0-0 draw against Liverpool at Anfield.

That would prove to be his final match in a United shirt. Having spent the next couple of months on the sidelines through injury, the news of Keane’s departure sent shockwaves around the footballing world.

It was reported that his departure centred around an appearance on MUTV, where Keane gave an interview criticising a number of the club’s players following a 4-1 defeat against Middlesbrough.

The Irishman’s comments were never aired, and have never been made available for public viewing.

Sir Alex Ferguson said in his autobiography that he had agreed, on Keane’s suggestion, to show the footage to the rest of the United players.

He added that there were then disputes between Keane and several other players, before the Irishman argued with Ferguson himself.

Ferguson wrote: “What I noticed about him that day as I was arguing with him was that his eyes started to narrow, almost to wee black beads.

“It was frightening to watch. And I’m from Glasgow.

“After Roy had left, Carlos [Quieroz] saw I was quite upset. Never in his life, he said, had he witnessed a scene of that nature.”

Speaking at an event in Limerick in 2018, Keane (via Limerick Leader) said that his decision to appeal a €5,000 fine was the reason behind his departure.

He explained: “The only reason I ended up leaving Man United was I appealed a €5,000 fine.

“If I hadn’t appealed the fine I wouldn’t have left Man Utd – don’t be brainwashed by the propaganda and lies.

“It is peanuts, you get fined that for being late for training at United.

“I appealed because I felt I shouldn’t have been fined for speaking about a match on the club station.

“Have I stepped out of line? Damn right I have. Man United fined me about half a million pounds over my career, but that is because I was sent off and I always held my hand up.

“I wished they played this video, it is propaganda, ‘we had to destroy it’. How do you even destroy a video?

“I left with my head held up high, I was fine with my actions, I always felt my intentions were to do the best for Man United.”

After his United career ended, Keane went on to join Celtic in December 2005.

He captained the side during an Old Firm victory against Rangers, before retiring on medical advice at the end of the season.

The Irishman then moved into management with Sunderland, who he led to the Championship title in his first season with the club.

After resigning as Black Cats boss, he spent 18 months as manager of Ipswich Town, before joining up with Martin O’Neill as assistant manager of the Republic of Ireland national team in 2013.

He then had spells as assistant at Aston Villa and Nottingham Forest, and now works as a pundit for Sky Sports.