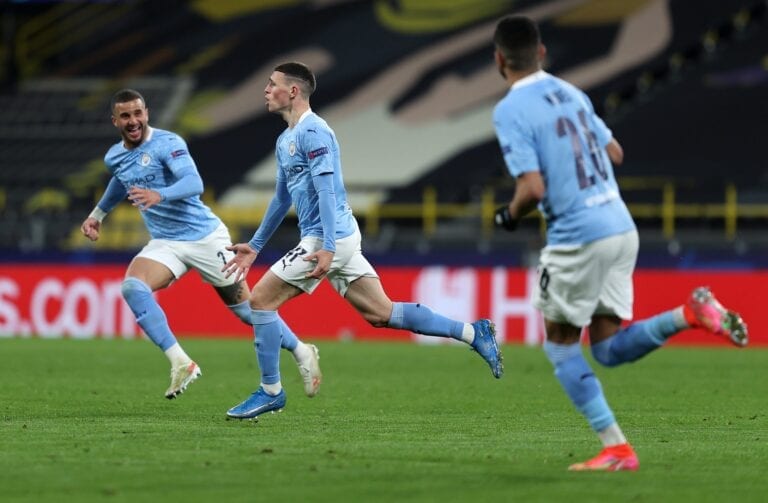 Manchester City‘s 4-2 aggregate victory over Borussia Dortmund in the Champions League quarter-finals took them another step closer to a trophy that has so far evaded them throughout their 141-year history.

It is, in fact, only the second time they have reached the semi-final stage of the competition. They first achieved that feat under Manuel Pellegrini in 2015/16.

The victory also kept City in the hunt for an unprecedented domestic and European quadruple of trophies this campaign (they won four domestic trophies in the 2018/19 season).

Pep Guardiola‘s side remain involved in the FA Cup, take on Tottenham in the League Cup final and are heavy favourites to lift the Premier League title come May.

Their victory over Dortmund, meanwhile, has created a mouth-watering Champions League semi-final tie against Paris Saint-Germain.

The question on everybody’s mind is – could they complete the quadruple? Let’s see what the odds have to say at the time of writing (all odds via Oddschecker):

Pep Guardiola’s side are rated 7/2 with Sky Bet to win the Premier League, FA Cup, League Cup and Champions League this season.

The first of those trophies is up for grabs on April 25. That is the date of their League Cup final clash with Jose Mourinho’s Tottenham.

That forms part of a gruelling 10-day period, during which they play both legs of the Champions League semi-final against PSG and face an away trip to Crystal Palace in the league.

They are 7/4 with Sky Bet to complete a Premier League, League Cup and Champions League treble.

City are rated at 6/5 with bet365 to secure another domestic treble.

That was a feat they completed in 2018/19. They also won the curtain-raising Community Shield to make it four trophies for that particular season.

They face Chelsea in the FA Cup semi-final at Wembley on Saturday. In addition, should both teams win their respective European semi-finals, they could be facing each other for the Champions League trophy as well next month.

City are 3/1 with Sky Bet to claim a Champions League and FA Cup double.

Both Chelsea and City play each other in the Premier League as well in May. The pair could therefore be seeing plenty of each other.

The Citizens are 6/5, again with Sky Bet, to win the Premier League and Champions League.