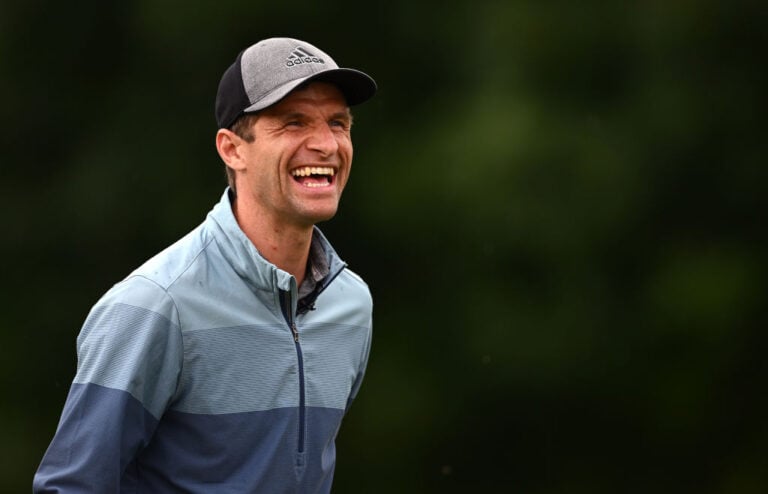 Bayern Munich and Germany star Thomas Muller loves his horses – and gave a brilliant explanation as to why.

Known as a ‘raumdeuter’ on the football field, Muller’s unique style of play has been instrumental in Bayern’s success. He has won eleven Bundesliga titles with the Bavarian giants, with 10 of those coming in consecutive years.

Additionally, he has won silverware in both domestic and European cup competitions. Muller has won six DFB Pokal, two Champions Leagues, and two UEFA Super Cups. The German has even found space in his packed trophy cabinet for two Club World Cups.

Muller has proved essential for the German national team on the international stage. He announced himself on the world stage at the 2010 World Cup in South Africa. Muller won the Golden Boot as his five goals fired Germany to the semi-finals.

Four years later, he achieved the ultimate prize in Brazil as Germany won their fourth World Cup. The Bayern Munich star played in every match, scoring five more goals in the 2014 tournament.

One of this generation’s more underappreciated players, Muller had another great season in 2021/22.

In what seems to be an expectation nowadays, Bayern picked up yet another Bundesliga crown in 2021/22. They clinched the title with three matches to play.

As ever, Thomas Muller was one of the standout players. He led the German league in assists last season, finding the key pass on 18 occasions. Muller also added eight goals to his contribution totals.

However, in Europe, Bayern had an underwhelming outing. After cruising the group stage and round of 16, they suffered a surprising exit in the quarterfinals. Villarreal got the better of the German champions, shocking everyone with a 2-1 win on aggregate.

Further disappointment came in the DFB Pokal. Monchengladbach knocked out Bayern in the second round with a stunning 5-0 victory – ending Bayern’s quest for a domestic double in October.

But Thomas Muller still finished the season with a trophy, so it could definitely have been worse. In the off-season, the German focuses on a passion that he shares with his wife; looking after their horses.

Thomas Muller and his horses

Lisa Muller is a professional equestrian athlete, and Thomas helps his wife with their horses. Unfortunately, this still receives criticism. For instance, animal rights group PETA accused the sporting couple of animal cruelty over their selling of frozen horse sperm.

Despite this, Muller still enjoys spending time with their animals and helping his wife compete at events. Lisa featured at the CHIO in Aachen, where she finished twelfth in the dressage on one of their horses.

Speaking to Bild at the event, Thomas Muller explained his feelings about the competition and watching from the sides.

“My wife and I are very fascinated by horses,” said the Bayern star. “Aachen is the Mecca of equestrian sport – you can compare it to the Champions League. We’re both a little nervous. As a passive spectator, you experience it more emotionally. You tremble with everything.”

The German international then hilariously gave his reasoning for keeping horses.

“It’s enormous fun to watch the horses grow up, the moments you have with them from birth,” said Muller (translation from Reddit). “The advantage is that they can’t speak.

It is hard to argue with Muller’s humorous logic there. Although it is disappointing that he does not own a talking horse.