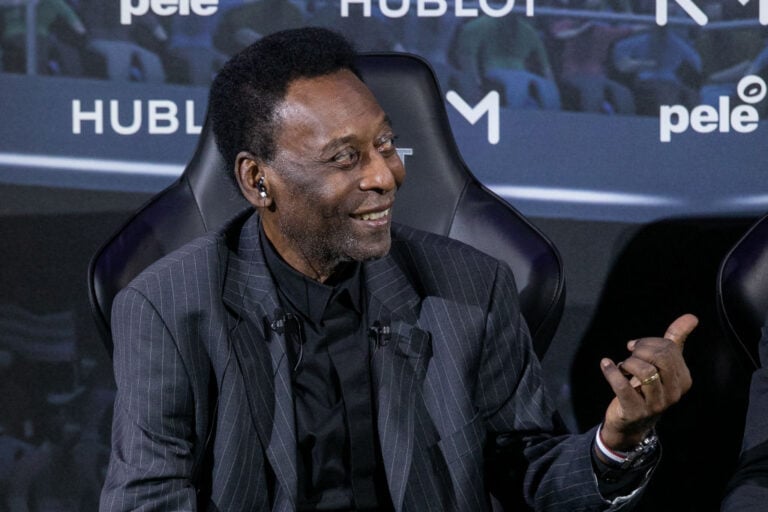 Although he has not tried his hand at management, Brazilian legend Pele still chose an awesome all-time XI for the FIFA video game franchise.

Widely considered one of the greatest players of all time, Pele’s impact on ‘the beautiful game’ transcended football. He won three World Cups with the Brazil national team, in 1958, 1962, and 1970. On a club level, he picked up many trophies with Santos, including two Copa Libertadores titles.

Pele led Brazil’s phenomenal attack and demonstrated his incredible goal-scoring prowess across three decades, as he scored 77 goals in 92 appearances. He is his country’s all-time leading goal scorer as a result.

Pele’s incredible ability to find the net has been the subject of controversy for many years. Whilst the fact that he scored hundreds of goals is unquestioned, the exact value is up for debate.

Santos claim that Pele scored 1,282 goals in his career, with 1,091 of those coming for Santos. However, his “official” total for the Brazilian club stands at 643, per ESPN. FIFA also put his combined career goal record at 767 officially.

Other totals omit friendlies and international friendly tournaments, hence the lower figures. But stats from these matches are something that Santos include in their records. These games were just as important as the “official” matches to the Brazilian club. Therefore the goals count.

Regardless of the exact numbers, Pele has every right to be named one of the greatest ever.

Last year, Pele selected an incredible all-time XI for the video game FIFA 21. The team was a playable AI opponent on the Squad Battles game mode, found in Ultimate Team.

In this team, Pele chose some former legends as well as current stars of the game. Here is the team below:

Contrastingly, Pele chose current stars to complete the rest of his all-time XI. For instance, Premier League duo Heung-Min Son and Mohamed Salah are in midfield. Meanwhile, PSG pair Sergio Ramos and Kylian Mbappe get in too.

In addition, Bayern Munich’s Manuel Neuer is the only German entry, getting the nod for the keeper spot.

Finally, no ultimate team is complete without two more players in the GOAT conversation. Lionel Messi and Cristiano Ronaldo complete the 3-4-3 formation team.

Now, critics may argue that this side is too unbalanced. But with that many attacking options, Pele must be trying to simply outscore the opposition. With the talent on show in this ridiculous squad, that should not be difficult.