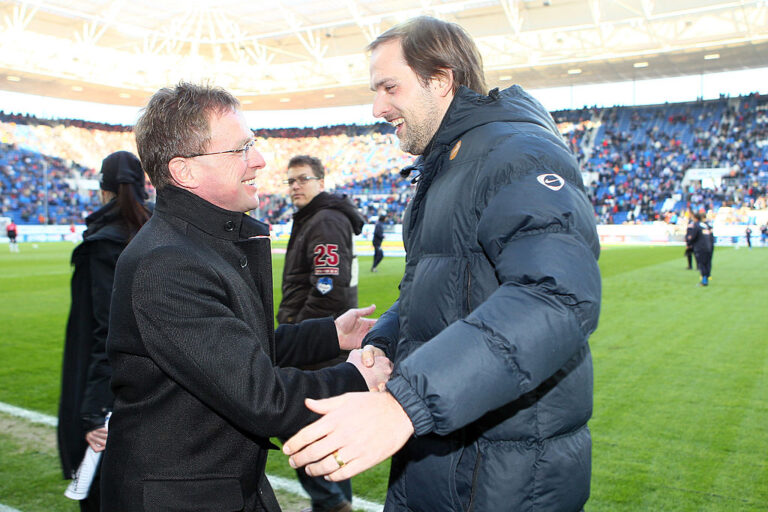 We look at how Ralf Rangnick helped Thomas Tuchel in management.

Manchester United play in London today when they take on Chelsea at Stamford Bridge. Although they are currently without a permanent manager, high spirits surround United. The reason for this is that a new era appears on the horizon.

By the time you read this piece, it may already have begun in an official capacity. By which I mean, United may have announced that Ralf Rangnick is their next manager.

The length of Rangnick’s contract is likely to be short. If he needs inspiration for turning things around quickly, he can look up the table at compatriot Thomas Tuchel. Chelsea were in a similar position to United last season when they sacked their club legend (Frank Lampard) after coming to terms with the limited powers of nostalgia.

We know what happened next. Tuchel took Chelsea up the table, finishing in the Champions League places. He won that competition, beating Manchester City in the final, and even reached the FA Cup final. A hell of a turnaround.

The power of a good coach is mighty indeed. Rangnick believes in laying the foundations of a club’s success with planning and preparation.

The incoming German veteran manager can take pride in Tuchel’s work too. He was a mentor to the Chelsea boss. If it wasn’t for him, Tuchel might never have become a coach in the first place.

Tuchel had a modest playing career.

A defender in the second division of German football, he had a natural reading of the game without possessing extraordinary technical abilities. It was a good living until Tuchel picked up a knee injury that ended his career. He was 24.

In an interview with The Telegraph, Tuchel admitted he didn’t have much saved away, but what he had he put into rehabilitation. He was desperate to save his career. Unfortunately, his efforts were in vain.

Forced to look elsewhere for an income, he enquired about openings in bars and cafes: “Overcoming my pride to go into a bar, because now we can talk and laugh about it, but taking the first step to admitting I needed to earn some extra money and to step out there and to, on one day, go into 10 or 12 cafes and bars to ask, ‘do you need some help, I would love to’. There was quite some pride to swallow for me.

“But it was good, and in the end, it turned out like, many times in life, that I made some friends and I got my positive feedback, my reputation or whatever from just being the guy I am, and they did not know that I played football.”

Tuchel was studying economics at the same time as he worked in a bar. This course was his fallback plan. Then, he got a better offer. It came from his old SSV Ulm manager Rangnick. He wanted him to coach.

Tuchel told the story on Sky Sports recently: “He [Rangnick] was my coach as a player, and he guided us. He opened, really, [our] eyes for us because we believed at that time in Germany that defenders run behind the strikers. No matter where they go. They go to the toilet, you follow them!

“It was a classic sentence at this time in German football. So, he showed us it’s not necessary [to do this]. We can defend in a zone; we can defend in the back.

“Everything was brand new from that moment. From that moment, it changed how I watched football games and television. And he was very, very demanding and he made us overperform as a team. And that does have a huge influence on all of us as players but to me also as a player. He put us in the opportunity to get up to [the] second division, and from there, into the first division.

“Which we, at this time, could not really believe that this could really happen. So he showed us this way. I got injured, and while I was like studying – a mix of studying being rehabilitation and working at a bar – we had a phone call. He asked me if I can imagine that he was at Stuttgart, to join the academy and try coaching because he thought it could be a good fit. And I was not 100% convinced, really. But I tried it as a kind of an internship – and I loved it. Yeah, it was a good decision.”

Rangnick has influenced the careers of many coaches great and promising, including Jurgen Klopp and Julien Nagelsmann.

United players should be keen to get insight from his experience and drive on the pitch – and maybe for in the dugout after playing too.