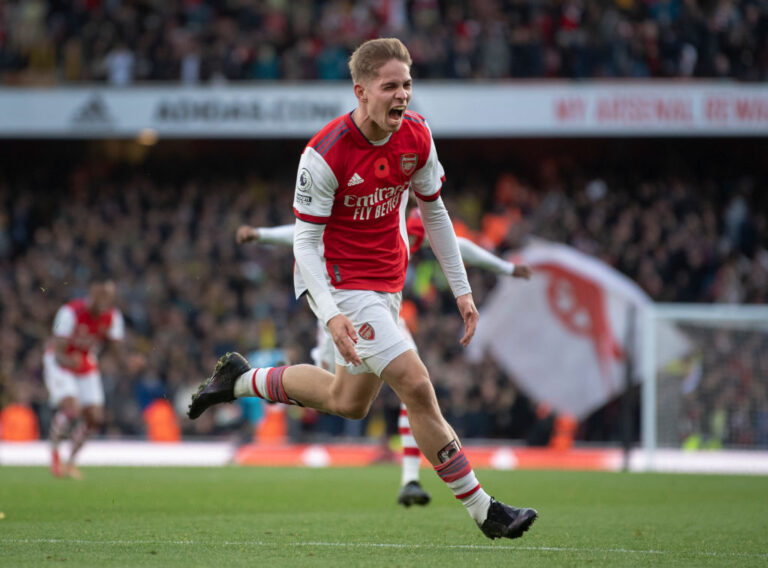 Emile Smith Rowe has been called up to the England squad by Gareth Southgate for the World Cup qualifiers with Albania and San Marino.

The Arsenal star has been playing very well so far this season. His performances have impressed the England boss, who has given him his first opportunity in the senior squad.

With Marcus Rashford and James Ward-Prowse unavailable, the 21-year-old has got his shot to represent his country. But how has he compared to Southgate’s other midfield options this season? Let’s take a look at the stats.

The Croydon man has been a threat in front of goal for Arsenal this season. He has scored four goals this campaign, the most important of which was in the North London derby against Tottenham Hotspur.

With three of his goals coming in his last four games, Smith Rowe is in exceptional form, sharing the top position with Manchester United‘s Mason Greenwood.

Read: These Mason Greenwood stats show how he compares to other England forwards.

Smith Rowe tops the list once again in this category, alongside Mason Mount, Bukayo Saka and Jack Grealish. The U-17 World Cup winner’s intelligence in possession, combined with his high work rate, has helped him secure his two assists this season.

The statistics reflect Smith Rowe’s ability to use his impressive vision and understanding of the game to glide past the opposition with ease. He tops the list of successful dribbles, which likely contributed to the manager’s decision to pick him for the squad.

Read: 5 surprising omissions from the England squad for the November 2021 international break.