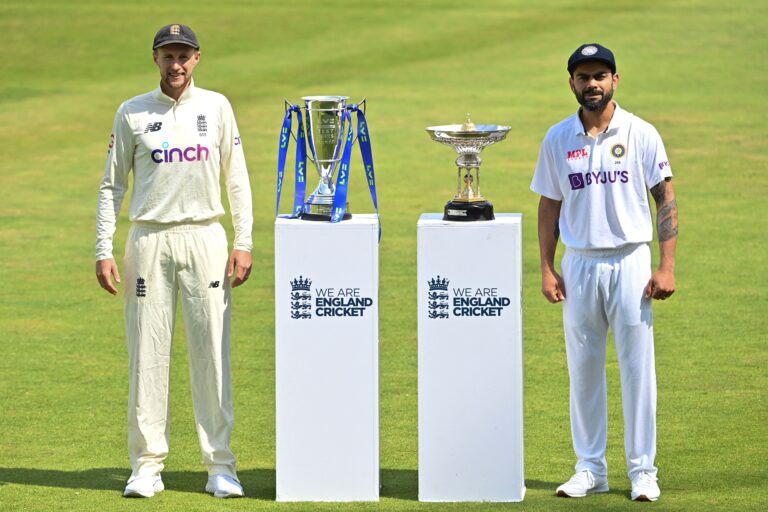 As you are reading this article, the first balls will have been bowled in the five-match Test series between England and India.

The action kicks off this week on a long-awaited series between two of cricket’s biggest powerhouses – and it isn’t one to miss.

It’s only six months since the two sides faced off in India. And whilst England pulled off a commanding win in the first Test in Chennai, the hosts came roaring back and took the series 3-1 as Joe Root‘s side faltered under a trial by spin.

India have not won a Test series in England since 2007, when Sachin Tendulkar, Zaheer Khan and co recorded a famous Indian victory at Trent Bridge.

That venue is where the first Test of this series will take place, before the sides travel to Lord’s, Headingley, The Oval and Old Trafford.

Let’s take a look at three battles to watch out for:

It is probably one of the most talked about on-field rivalries in cricket. One of England’s two most premier seam bowlers against India’s premier batsman.

Series after series, the pair create some compelling cricket. In India’s tour of England in 2014, Anderson got Kohli out on four occasions.

Four years later, in 2018, Kohli responded by producing one of the finest displays of batting over a series ever seen by an overseas batsman. His 149 in the first Test at Edgbaston was notable for the fact that no-one else on his team scored more than 26.

Anderson didn’t get Kohli out during the winter, but the battle will resume at Trent Bridge this week – expect both men to be at the top of their games.

Opening partnerships are often key when it comes down to laying a base for a big first innings score, or even leading a comeback from a deficit.

England’s most common partnership at the top of the order is between Rory Burns and Dom Sibley, with the pair averaging a touch over 30 in 22 innings when batting together.

India, meanwhile, have had several issues in the opening department prior to the series. Regular opener Shubman Gill was sent home with an ankle injury, whilst Mayank Agarwal suffered a concussion in the nets earlier this week.

The Indians opted with KL Rahul to come in, who averages 44.44 whilst opening the batting across 30 innings.

The reason the top two could be crucial is because of the strengths and form of each side’s middle order. India have a side packed with batting talent, including Kohli, Ajinkya Rahane and Cheteshwar Pujara.

England have their captain Joe Root and wicket-keeper Jos Buttler in the middle order, but will miss Ben Stokes. The 28-year-old is absent as he has taken an indefinite break from cricket to prioritise his mental wellbeing.

In addition, Jonny Bairstow has three ducks in his last four innings, and will be desperate to return to form in the long format at Trent Bridge.

Battle of the all-rounders

With Stokes not in the squad, the responsibility could well fall to Sam Curran to play a similar sort of role throughout the series.

Whilst Curran’s batting is not at the level of Stokes – he does, though, average over 25 at Test level – his 44 wickets from 21 Tests represents a good return.

India will have Ravichandran Ashwin, Ravindra Jadeja and Axar Patel as a spin bowling all-round trio available for selection.

This England side will not have fond memories when it comes to either Ashwin and Axar, both of whom piled on the wickets during the winter.

Axar took 27 wickets at a simply remarkable average of 10.57 over the three Tests, whilst Ashwin took 23 and smashed a century in Ahmedabad.

Jadeja is the one to have got the nod for Trent Bridge, having also been extremely effective when available (he missed the winter series v England through injury). The 32-year-old averages over 35 with the bat at Test level, and has 221 wickets at 24.41.