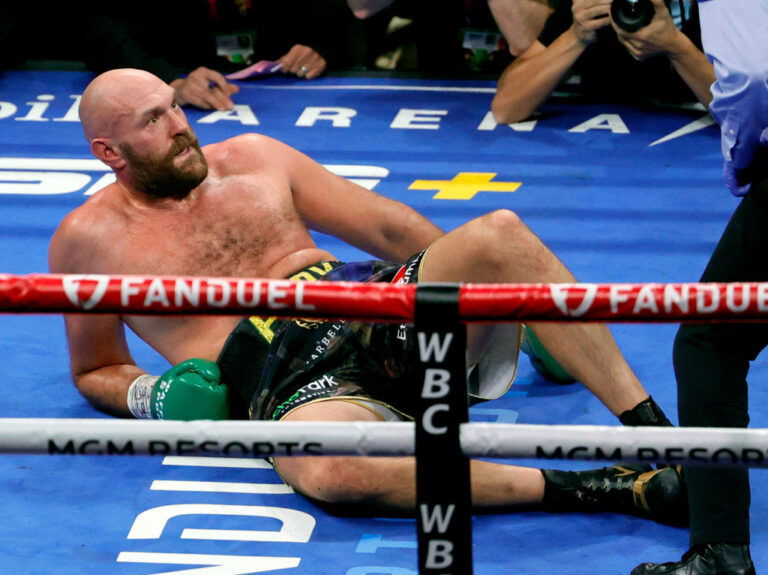 Pundits are giving Dillian Whyte little to no chance of beating Tyson Fury on April 23, but Tony Bellew has made a prediction that will give the underdog’s fans a glimmer of hope.

This monstrous match-up is one of the biggest in British boxing history. The rivalry between ‘The Gypsy King’ and ‘The Body Snatcher’ dates back years.

The pair of heavyweights used to share a friendship until Whyte claimed to the media that he’d dropped Fury several times in sparring.

His claims burnt the bridge that had previously allowed them to train together and left the wood rotting into the water. But now, they finally get to settle their grudge in the ring. The announcement of the bout had boxing enthusiasts chomping at the bit.

They assumed they’d get to witness a titanic verbal battle between two of the greatest trash-talkers in the sport. But uncharacteristically, Whyte went radio silent.

He refused to attend the initial media day or upload a single promotional post. He eventually broke his silence with less than two weeks to go. But fans aren’t too confident in his chances of winning the contest.

Fury possesses a significantly better boxing IQ and a far wider array of shots in his locker. His superior head movement and footwork could leave his opponent chasing shadows until he picks the perfect moment to lay him out.

However, ‘The Bomber’ still believes that the challenger is in with a chance.

In an interview with IFL TV, the boxing icon explained why writing off Dillian Whyte is a bad idea.

Bellew claimed: “Dillian can win this fight. I know for a fact, Tyson Fury does not think in his mind that this is an easy fight – because it’s not.

“You can’t have an easy night. He’s going to put it on you. The easiest it could possibly be is if you cop him in the first round with one big shot, and he goes. But as we’ve seen, he’s durable too, and he’s willing to get off the floor.

“Tyson’s going to have his work cut out. Tyson’s by far a better boxer than Dillian Whyte. I’m not telling you guys something you don’t already know. But has Tyson Fury faced someone who’s willing to keep getting up off the floor and has the technical ability to drag him into a hard fight?

“He’s definitely never faced a body puncher as good as Dillian Whyte as well. Believe you me, Tyson Fury has a good size midriff to hit as well. It’s not small. Dillian’s going to hit that. And I think AJ was quite open in saying that he’s the hardest body puncher he’s ever faced. Dillian hits ruthlessly to the body. Expect him to go their early doors.

“Dillian Whyte will have Tyson Fury down. The big question is can he keep him there? I’m not sure he can.”

The former cruiserweight champion may have a point, Fury’s hit the canvas on six different occasions throughout his career, but nobody’s ever kept him there.

Who has put Tyson Fury down?

The Gypsy King has become renowned for his remarkable powers of recovery. In his incredible trilogy with Wilder, ‘The Bronze Bomber’ dropped him four times. But despite the American’s formidable power, Fury somehow rose to his feet and found a way to survive.

But the American isn’t the only man to have ever given the Brit a scare. The narrative that Fury has avoided punishment throughout his career isn’t the case. In the early stages of his campaign as a professional boxer, he regularly got involved in unnecessary wars, which led to near-disastrous consequences.

In 2011, the 6 ft 9 giant collided with little-known Canadian Nevan Pajkic and severely underestimated him. In the second round, the significantly smaller fighter caught the future great with an overhand right which left him hurtling towards the floor.

However, Fury bit down on his gum shield and traded leather with his unbeaten opponent rather than give up. He put him down before unloading a series of powerful shots which forced the referee to call a halt to proceedings.

But despite winning the contest, he didn’t fix his vulnerability to the overhand right. Two years later, he fought cruiserweight legend Steve Cunningham at Madison Square Garden, and the bout played out exactly the same way as the Pajkic fight.

Fury went down in the second, climbed to his feet and somehow found a way to overcome adversity to land the knockout shot.

Granted, the heavyweight has gone down on multiple occasions. But he’s always found a way to get up—this is a testament to his incredible powers of self-belief. But there’s only so many times you can pull off the comeback, and if Bellew’s right, Fury’s about to have to go to the well again.