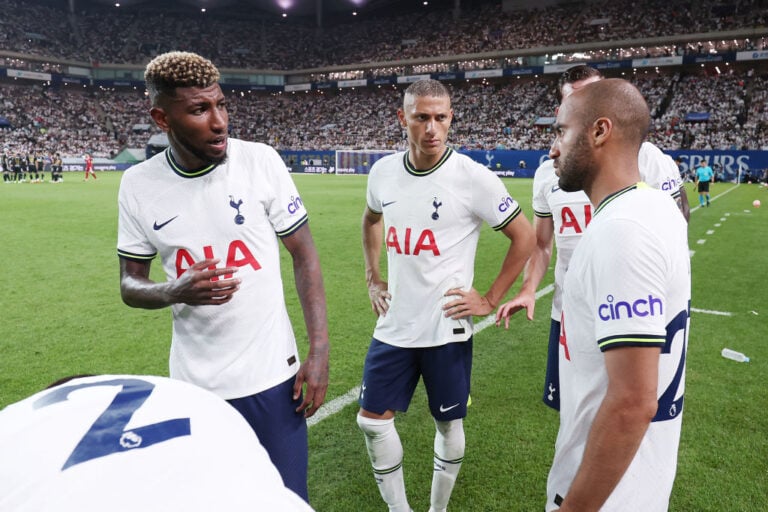 Tottenham have released their new away kit for 2022/23 – and fans have not given the design a glowing reception.

Spurs will enter the upcoming season with cautious optimism following a busy summer transfer window. Antonio Conte has not been afraid to craft his squad to his requirements; as a result, the North London side made several signings.

They picked up Ivan Perisic and Fraser Forster on free transfers whilst signing Clement Lenglet on loan from Barcelona. Additionally, Daniel Levy has splashed the cash. Yves Bissouma joined from Brighton for a fee of £35 million, and Spurs spent £60 million to snap up Richarlison.

However, Tottenham may not have the most popular away kit among Premier League teams for 2022/23.

Heading into their sixth season wearing Nike, Spurs have released the third instalment of their “Dare To Do” series of kit releases. This part of the series, called “Bold”, unveiled their alternate strip for next season.

Utilising Nike’s typical template for this year’s kits, the bulk of the shirt comes in a striking blueish purple colour. In contrast, the shoulders are black, with fluorescent yellow trim on the sleeve cuffs and around the neck.

Interestingly, the club crest and Nike logo stack on top of one another, sitting centrally in the shirt design. These logos, as well as the AIA and Cinch shirt sponsors, are in bright white. The last time Spurs had a central crest was back in 2020/21, on their yellow third shirt.

The shorts of the new Tottenham away kit are in black for this season. They also use fluorescent yellow – in small accents at the base of the shorts.

An accompanying release video for the kit demonstrated the bold effect of the shirt, as players and fans sport the new gear under neon lights. Tottenham’s club website says that the video takes inspiration from grassroots football while celebrating “individual personalities and energy.”

Alongside this, eagle-eyed viewers may spot subtle references to Spurs’ past, such as a numberplate tribute to iconic striker Jimmy Greaves.

Unfortunately, fans have not reacted positively to the shirt on the whole.

What do fans think of it?

A team’s new strip always brings out the most polarising opinions among supporters. For this Tottenham away kit, fans’ reaction was overwhelmingly negative. Spurs faithful took to Reddit to voice their feelings about the bold new design.

“Was really hoping I’d like it more when I see the official pics, but d**n is it bad,” wrote one disappointed user. “One of the worst kits in years.”

Other comments followed a similar trend.

“They could have just recycled the 21/22 away kit instead of this abomination,” fumed another.

Meanwhile, some questioned why the Tottenham hierarchy did not step in to change a kit that had already garnered negativity online after leaks of 2022/23 shirts. After all, shirt sales are a useful source of income in the football industry.

“Levy should have vetoed it immediately,” said a Redditor. “It’s going to be one of the lowest selling kits…”

Right now, it’s not a classic in fans’ eyes. But, if Tottenham manage to win their first trophy since 2008 in 2022/23, maybe supporters will warm to the kit.