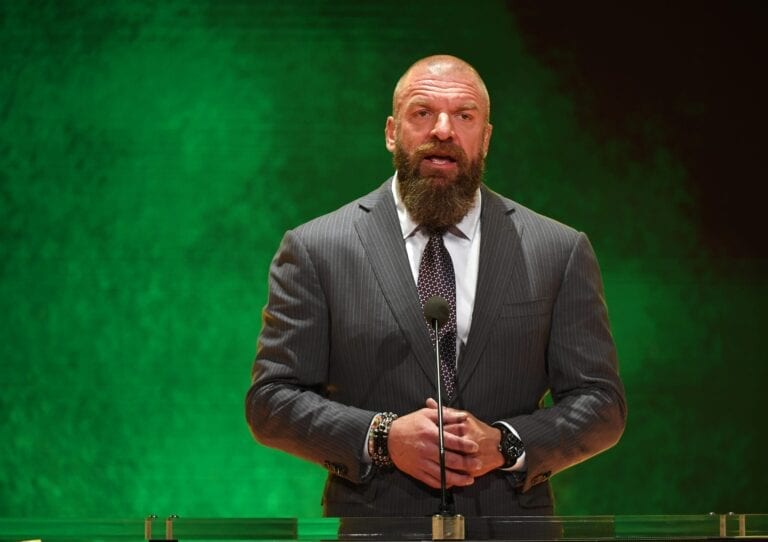 Triple H has responded to Undertaker’s comment that WWE’s current product is soft, by saying the best thing about The Deadman is his honesty, and that he’s sure the statement was meant with the best intentions.

Speaking with Kenny McIntosh, The Game responded to comments from The Undertaker that WWE’s product is a little too soft for his liking nowadays – and added that he looks forward to working with Undertaker to improve.

“Taker has always been one of those guys that is very bluntly honest and the great thing about him, is he’s bluntly honest with that opinion; ‘Here’s how I think it should be, and here’s how I could help you to get there.’ So he’s wide open to all of that. His comments and his intentions are always with the best of intent or desire to improve.”

The Game added how Undertaker has earned the right to an opinion, but said it’s simply a matter of opinion.

“I do believe he has a wealth of knowledge that, if he speaks… There’s certain guys in the business that if they speak, they’ve been around a long time, seen a lot of things and they’ve earned the right to, if they speak, you listen and you take their point of view and you work with it.

“He’s one of those guys for sure. So, if he says it and believes it, there’s something to it. Then again every generation is different and what people are willing to accept, everybody believes that certain generations of music are better than others too and at the end of the day, all of this is opinion, we all like what we like, we all dislike what we dislike, and we give our opinions on it.”

Triple H concluded by saying he respects Undertaker’s opinion, and looks forward to working with The Deadman to make the product better.

“It really comes down to, ‘What do the masses of people like?’ The successful companies can tap in long term to the masses of people and get the most people to buy into, to like, to want to participate with today’s product, so that’s where it’s at. For Taker, I absolutely respect his opinion and take it into account and look forward to working with him on making it all better – on every level.”

Following his retirement, Undertaker had spoken on the Joe Rogan Experience podcast about how he struggled to enjoy the current product.

“It’s tough right now, for me, because the product has changed so much. It’s kinda soft. I’ll probably piss a lot of people off but they need to hear it. To the young guys, ‘oh, he’s a bitter old guy.’ I’m not bitter, I did my time. I walked away.

“I just think the product is a little soft. There are guys here and there who have an edge to them, but there’s too much pretty and not enough edge.”

Following his Final Farewell at Survivor Series, The Undertaker teased that he may very well be heading to NXT as a coach and, back in December, Triple H told Inside The Ropes’ Gary Cassidy that The Undertaker was set for a role in NXT following his retirement from in-ring competition.

“Well, I can tell you this, that any time Taker is involved here, any time he has walked through these doors, everybody that’s here is better for it. They all come out of here with a different perspective, a fresh viewpoint, and he’s one of the most knowledgeable guys that has ever been in the business. Even myself, I learn from him every time I’m around him.”

Triple H added at that point that Undertaker joining NXT was just a matter of time.