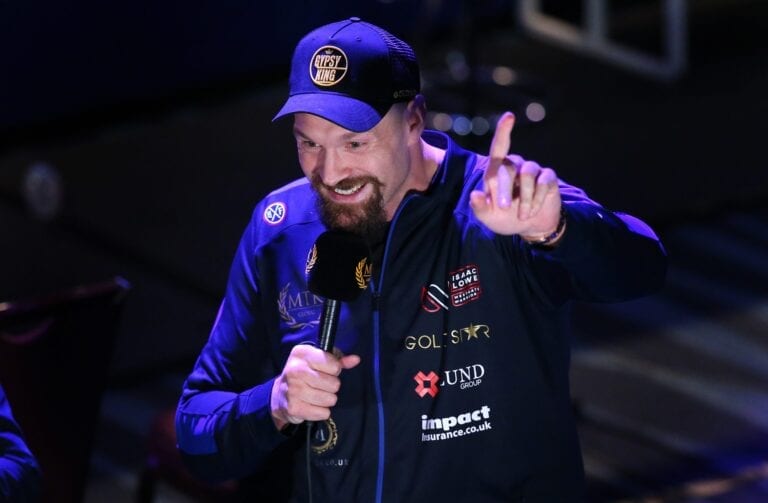 Tyson Fury looks in top shape ahead of his blockbuster fight with Anthony Joshua this summer.

The 32-year-old said last month that he was drinking “10 to 12 pints of lager a day” at a time when the Joshua bout had not been fully announced.

However, the latest photo posted of Fury shows he has clearly been putting the work in ahead of the fight.

Fury underwent a body transformation in preparation for his return to boxing in 2018.

He has spoken candidly about his struggles with alcohol addiction and depression that occurred after his victory over Wladimir Klitschko three years earlier.

His weight rose up to above 27 stone during his time away from the ring.

Fury reportedly lost 112 pounds for his comeback fight against Sefer Serferi in 2018, whom he defeated within four rounds.

He would then go on to record victory against Italian boxer Francesco Pianeta. That preceded his draw against Deontay Wilder in their first fight.

Fury then completed one of boxing’s greatest ever comeback stories with victory over Wilder in Las Vegas last year.

Details still to be confirmed for Fury/Joshua fight

A date for the showdown bout between Fury and Joshua is yet to be decided.

Joshua’s promoter Eddie Hearn told the AK & Barak Show that he wants the first bout to take place in July of this year.

And although the location is also yet to be confirmed, Hearn indicated that Wembley Stadium could be a possible host dependent on crowd restrictions.

That would likely point to a late July date if Wembley is confirmed as the host stadia, with the final of the European Championships set to take place there on July 11.

It would be the third time Joshua has fought at Wembley in four years, following victories against Alexander Povetkin and Wladimir Klitschko.