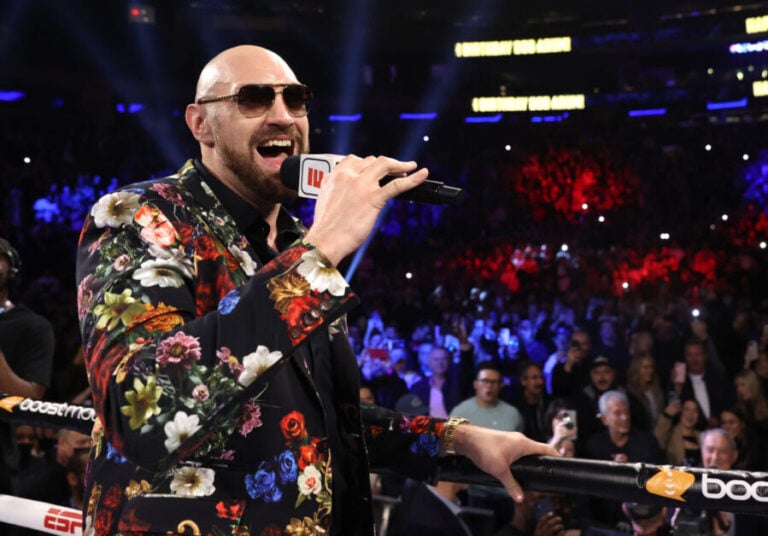 Tyson Fury seemed to have secured the perfect opponent for his next fight. But with a potential blockbuster collision with Dillian Whyte on the rocks, his promoter Bob Arum has found two possible replacements.

In October, Fury cemented his status as the best heavyweight on the planet. He rubberstamped his dominance over Deontay Wilder in a five-knockdown thriller. The Morecambe-based man needs to secure the best possible dance partner for his next fight.

Whyte seemed like the perfect candidate for this role. The Brixton man has beaten a who’s who of the best heavyweight contenders on the planet. In addition, the grudge that he has for Fury runs deep. The pair used to be friends, but following Whyte’s claims that he dropped the 6ft 9in giant in sparring, their relationship has soured.

Read: Tyson Fury vs Dillian Whyte: How the ‘Body Snatcher’ has earned a potential blockbuster fight

Therefore, the best way to settle their differences would be for the two men to put it all on the line in the ring. However, due to a disagreement regarding purse splits, Whyte may miss out on a huge payday for the time being. Fury’s promoter Arum told iFL TV that his client’s potential opponent has been asking for a purse of £10m.

The WBC is currently handling the situation. But it could take a long time to resolve, hence the fact that Arum is allowed to look for another potential boxer to battle it out with his premier heavyweight.

But who has he found?

Who does the notorious American promoter want Tyson Fury to fight next?

During his interview with iFL TV, the 90-year-old also revealed the two potential names that could be given the opportunity of a lifetime.

He said: “Frank Warren and I are looking for another opponent for Fury’s fight. Depending on who we select, it could be in Manchester or Las Vegas.

“So we’re looking at Andy Ruiz as a possibility. He’s available. But we’re also looking at the big Finnish kid, Helenius, who looked very good on the Fury vs Wilder 3 card.

“Those are the two principal guys. I guess if it’s Helenius, we do it in the UK. But if it is Ruiz, we’ll do the fight in Las Vegas. Fury is adored by the American fanbase. This Christmas, I was up in Aspen, and everyone was talking about Tyson Fury and what a character is.”

Arum has suggested two fantastic fighters. But could either of them compete with Fury?

‘The Destroyer’ is best known to British fight fans for his incredible upset victory over Anthony Joshua at Madison Square Garden in 2019. Going into the contest, nobody gave the American a chance. He was significantly smaller and nowhere near the same physical condition as his opponent.

When he went down in the third round, most expected the underdog to be another easy opponent for AJ. He was anything but.

Ruiz rose from the canvas and put the favourite down on three separate occasions to secure one of the biggest upset wins in boxing history.

However, he failed to train correctly for the rematch, which cost him. He looked slow and flat-footed, and lost his titles via unanimous decision.

However, since then, the penny has dropped, and he has now rededicated himself to the sport. Ruiz is currently training under the tutelage of Eddy Reynoso, who is also the head coach of Canelo Alvarez.

He returned to winning ways earlier this year. On June 1, he defeated Chris Arreola in an excellent fight to propel himself back into world title discussions.

Ruiz may lack the boxing skill to make Fury pay, but if he can get into range and let his rapid hands fly, maybe he’d have a chance.

The ‘Nordic Nightmare’ is currently enjoying a massive resurgence in his career. Following losses to Johan Duhaupas, Gerald Washington and Whyte himself, it seemed his best days were behind him.

But in his last two outings, the 6ft 6in monster has proved that he’s still got plenty to give. When he went toe-to-toe with Adam Kownacki last year, the Finnish giant was expected to be merely a stepping stone for the Polish prospect.

However, Helenius didn’t read the script. He battered his adversary into a fourth-round stoppage in a performance that shocked the world. When the rematch rolled around, the Nordic heavyweight was given slightly more of a chance, but he was still a massive underdog.

Once again, however, Helenius proved to be far too powerful for his opponent. The fight finished in the sixth round. This victory was the biggest of his life to date, and because of this, he feels like now may be the time to challenge himself against the very best.

In all likelihood, the ‘Gypsy King’ would be far too good for him. But if Helenius was selected as the next fight for Tyson Fury, it would be a fantastic opportunity for UK fans to witness a big contest on home soil.

In boxing, you can never be too complacent. The ‘Nordic Nightmare’ isn’t the best contender on the planet, but he’s undoubtedly one of the biggest punchers. Fury couldn’t afford to take his eye off the ball for a single second if this fight does happen.