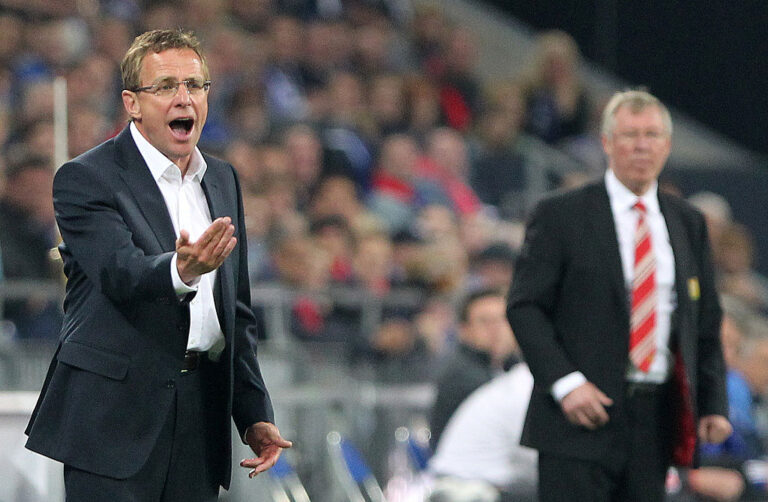 Inherited problems and complications related to Covid have meant the Ralf Rangnick era at Man United has gotten to a slow, albeit relatively impressive, start. Fans have high hopes for the German but must remember that success doesn’t always happen overnight.

For a pertinent example of this truism, they need to look no further than their most successful manager of all time, Sir Alex Ferguson. The Scot took seven years to deliver a league title after working hard to change the culture of the club.

Reminders of the Ferguson story are not necessary. He remains a giant figure at United and regularly attends games. Today, he turns 80. To honour the occasion, we’ve decided to look back on his previous duels with one of the men following his lead.

Join us as we reminisce about the times that Rangnick took on United when they were under the charge of the legendary Ferguson.

Cast your mind back to 2011. United were still regularly winning trophies under Ferguson. They were on course for their third Champions League final in four years. After disposing of Chelsea in the quarter-finals, United faced the competition’s surprise package, Schalke.

A midtable Bundesliga outfit, Schalke failed to win nine of their opening ten league matches of the campaign. Yet, they picked up famous victories over Bayern Munich domestically and Inter Milan continentally during the campaign.

A 5-2 win at the San Siro marked them out as a team to take seriously. Ferguson would not underestimate the Gelsenkirchen club or their bespectacled coach, Rangnick, a relative unknown on the European stage.

The first leg of their encounter was in Germany. United dominated the match, creating chances at will. Schalke were only kept in contention by the heroics of Manuel Neuer.

Around this time, United sought a goalkeeper to succeed Edwin van der Sar between the sticks. They ended up opting for David de Gea, but English viewers understood the hype surrounding Neuer after tuning into this performance.

Neuer could only keep United out for so long, though. Ryan Giggs eventually broke the deadlock in the second half. It was a hammer blow to Schalke’s confidence. They conceded a second goal two minutes later, with Wayne Rooney getting it.

Schalke would need a repeat of the miraculous performance of Milan at Old Trafford. But judging by their frazzled display at home, with Schalke’s players frozen by the pressure of the fixture, an away result looked unlikely.

Unfortunately for Rangnick, no miracle occurred in Manchester the following week. Schalke were spent. The occasion once again got the better of the visitors, who suffered a chastening 4-1 defeat, making it 6-1 on aggregate.

United surged with confidence at this stage of the campaign, allowing Ferguson to rotate his team despite the grandeur of the occasion. And it paid off. The scorers were Antonio Valencia, Darron Gibson and Anderson, who bagged a brace.

Before the game, Rangnick had described Ferguson as ‘an absolute icon’, praising the Scot for possessing the fire to continue winning well into his sixties. Ferguson was six years older then, 69, than Rangnick is now, 63.

After the semi-finals wrapped up, Rangnick told reporters that he would have a drink with Ferguson. He reflected on the game, admitting that his Schalke side had reached their limits, and the better team beat them.

Rangnick said: “He [Ferguson] asked if we could have a drink together after the press conference – we’ll see how long this all takes. You can’t afford this on such a [high] level, and then the game took another direction. You have to say Manchester United were too good for us. We were hitting our limits.”

Then the underdog, Rangnick will now have a new perspective on these big occasions as United boss.

Managers have gushed about his achievements in the game in recent weeks. A student of the game as well as a teacher, we imagine that his battles with Ferguson taught him many lessons about how to handle massive European nights.