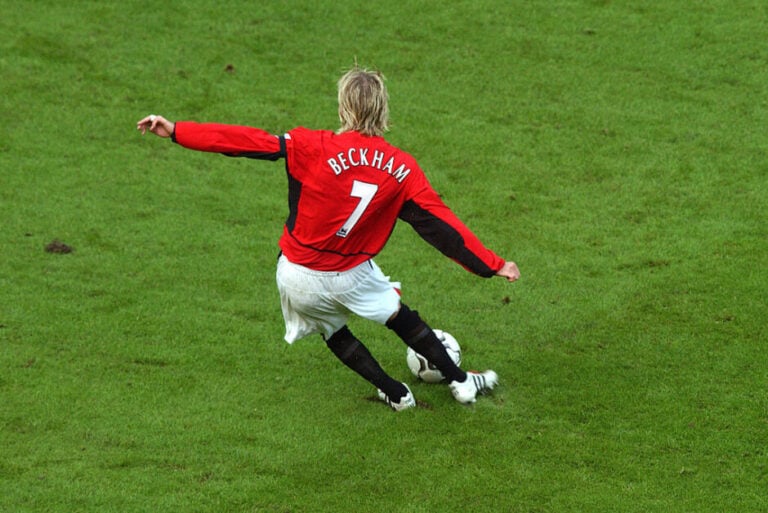 Curling shots are among the most beautiful in football. There’s nothing like seeing the ball taking on an impossible angle to find the back of the net.

However, we’ve decided to give this list our own spin. The five curling shots below all found the back of the net during live play, not from free kicks.

The prodigal son had returned. After a disappointing four-year spell at Real Madrid, Kaká re-joined AC Milan on a free transfer in 2013. However, his comeback didn’t last long. After the Rossoneri failed to qualify for European competition, Kaká returned to his first club Sao Paulo in 2014.

Nevertheless, Kaka had a solid last season for Milan. He dished out eight assists and scored nine goals, including this absolute beauty against Lazio. Kaka has always been known for his sensational curling shots, and this might be one of the best.

Beckham knew how to curl the ball. His curling shots on free kicks are the stuff of legend; however, we’ve decided to go with one of his best in-play strikes.

England faced Wales at Old Trafford during the 2006 World Cup Qualifiers. It was a dominant performance for The Three Lions, who got an early lead with a Lampard long-range shot.

But it was Beckham who would steal the show with one of his best long-rangers ever.

This is Arjen Robben in a nutshell. You’ve seen him do it a hundred times, so you know exactly what’s going to happen. He will race into the area, then cut left, then curl the ball into the top-left corner.

Good luck stopping him, though.

The Dutchman scored one of his best curling goals in a dominant display versus Barcelona. Bayern Munich pulled off a 7-0 aggregate win and advanced to the final in Wembley, where they would defeat Borussia Dortmund to complete their treble haul.

Karim Benzema’s curling shot against Athletic Club last week deserved a spot in our list. Real Madrid’s leading scorer in the past four seasons has got a few outstanding curlers to his name, but this might top the lot.

It’s a simple-yet-beautiful play. Toni Kroos sees Benzema meandering around the corner of the box and finds him with a simple pass.

You expect Benzema to stop the ball and look for a cross, but he strikes it with force instead, curling it with an impossible angle to find the back of the net.

Ricardo Quaresma’s signature trivela is one of the most iconic curling shots in football. There’s not a lot defenders can do against it.

Even with his man glued to him, the Portuguese winger readies his leg in less than a second and curls the ball into the net with the outside of his right foot.

You can count Quaresma’s trivelas by the dozens. We’ve decided to go with an early one, against Rio Ave in 2005. Rio Ave’s reaction is almost as good as the goal itself, with the defenders exchanging puzzled looks and the goalkeeper doing some hilarious cross-armed theatrics.