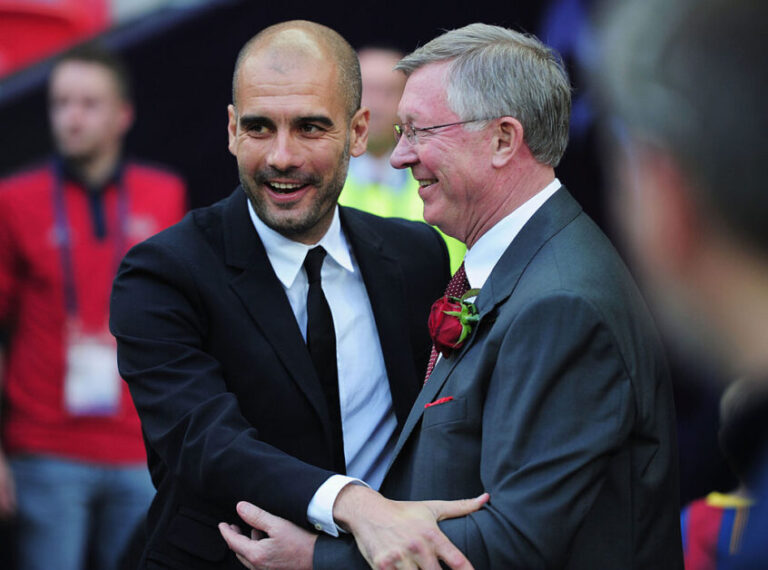 With 48 career titles under his belt, he had the most successful managerial career in football history.

Ferguson took over Manchester United in 1986 and retired at the end of the 2012-13 season. He went out with a bang, helping United to claim their 13th Premier League title.

There are only a handful of managers that got the best of Fergie throughout his illustrious career. To celebrate his 80th birthday, we have listed Sir Alex Ferguson’s five toughest rivals.

Graham and Ferguson became rivals even before their teams faced each other on the pitch.

It was March 1986 and Arsenal were looking to appoint a manager after Don Howe’s resignation. One of their first choices was Sir Alex, then Aberdeen manager and temporarily in charge of the Scotland national team.

However, Ferguson decided to wait until after the World Cup to decide his future. Arsenal weren’t patient enough and appointed George Graham on May. Obviously, Ferguson would join United only a few months later.

Graham defeated Ferguson eight times throughout his career, including a 1-0 win at Old Trafford that ended with an infamous brawl. Graham would be fined for the incident, and both teams were deducted league points.

A few weeks later, Sir Alex took his revenge with a 6-2 thrashing in the League Cup.

Houllier’s managing career was a peculiar one. After spending his entire career in France, he was appointed joint manager at Liverpool with Roy Evans in the summer of 1998. Evans would resign a few months later, leaving Houllier on his own to restore discipline to the so-called Spice Boys.

Throughout his six-year Liverpool stint, Houllier was key in promoting youngsters to the first team. That includes legends Jamie Carragher, Michael Owen, and one Steven Gerrard.

He also won a cup treble during a 2000-01 season that saw Liverpool record their first double over United in 22 years. Early that season, Liverpool inflicted Ferguson’s first league home defeat in two years.

The Frenchman was one of Ferguson’s closest rivals. Sir Alex paid a heartfelt tribute to his “good friend” upon learning about his passing last year.

Wenger and Ferguson are two of the longest-serving managers in English football history.

No other manager faced Sir Alex more times than Wenger. The Frenchman and Ferguson saw their sides go against each other 49 times, with Wenger claiming 16 wins.

Wenger’s first victory in the long-standing rivalry was a 3-2 win in 1997 featuring an absolute screamer from Patrick Vieira. Teddy Sheringham levelled it up twice, but a David Platt header in the last minutes brought it home for Arsenal.

Both managers would leave a lasting mark on their clubs. Wenger modernised Arsenal’s training methods and had one of the best seasons in football history with The Invincibles in 2004.

Upon his appointment in 1986, Ferguson inherited a precarious United side, and it took him years to take them to the top of the league. However, United would end up winning dozens of trophies under Fergie’s iron rule.

Sir Alex’s record against The Special One is the worst among managers that he faced more than ten times. Under Ferguson, United averaged 0.94 points whenever they played against a Mourinho side. Ferguson got the upper hand only on three occasions for Mourinho’s seven. They also drew six times.

Mourinho and Ferguson first met in 2004, when Porto faced United in the Champions League last 16. A last-minute goal from Costinha in the second leg would send Porto to the quarter-finals after their 2-1 victory in their first match.

Mourinho’s celebration dashing down the touchline at Old Trafford is one of the most memorable moments in Champions League history.

Ferguson often saw his side outplayed by Mourinho’s during the latter’s first Chelsea tenure. A 3-0 win in April 2006 sealed Chelsea’s second league title in a row. There was no bad blood, though – Mourinho and Fergie would often share a bottle of wine after facing each other.

Their last encounter proved to be the most controversial. In 2013, Real Madrid knocked United out of the Champions League on a 3-2 aggregate after Nani received a straight red card for a high challenge on Arbeloa.

Ferguson was too enraged to speak with the media after the game. That season would be his last as Man United manager.

Pep Guardiola first went head-to-head with Ferguson in the 2009 Champions League final. It was his debut season as a manager at the highest level, and he led Barcelona to the first treble in Spanish football history.

United went into the final with lofty expectations. Propelled by prime Cristiano Ronaldo and Wayne Rooney, the then-defending champions were looking to be the first team to retain the European Cup since AC Milan in 1990.

But for the first time in his career, Sir Alex looked out of his depth.

Barcelona got an early lead when Samuel Eto’o scored in the tenth minute. A Giggs free-kick was one of the few chances United had in the whole game. They ended the final with only two shots on target despite holding Barcelona’s possession to only 51%.

The second and final time Fergie and Guardiola met was also during a Champions League final.

Barcelona lifted the trophy after a 3-1 win. The match was even more one-sided than the 2009 final, with Barca totalling 19 shots on target for United’s four.

Sure, Ferguson only faced Guardiola twice in his career, but his sides were simply helpless against Pep’s. The Catalan deserves to be one of Sir Alex Ferguson’s toughest opponents – if not the toughest.

With 31 career trophies, Guardiola is the only active manager who can look eye-to-eye to Sir Alex.