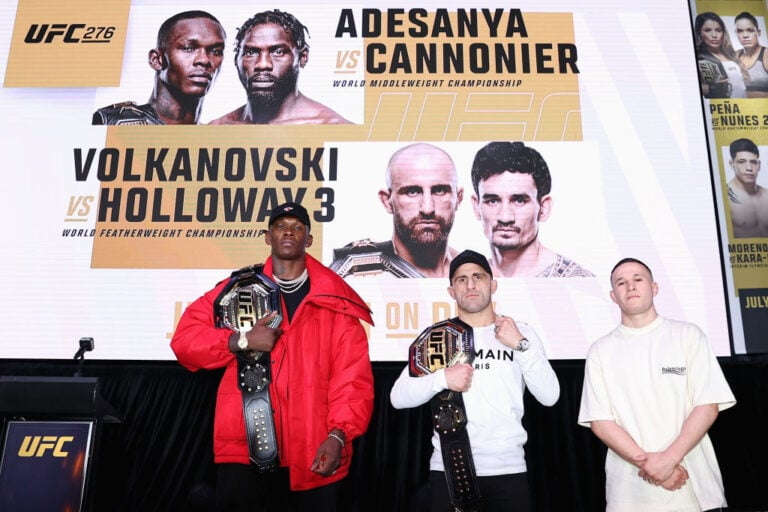 There are championship belts on the line this weekend as some of the best mixed martial artists do battle in the octagon. Here are all the details of UFC 276, including the start time for UK fans and where you can watch it.

The T-Mobile Arena in Las Vegas provides a familiar backdrop to the event coming later this week. Superstar middleweight Israel Adesanya will look to defend his champion status for the fifth time – on this occasion against America’s Jared Cannonier.

Meanwhile, another championship belt is up for grabs in the featherweight division. Max Holloway takes on Alexander Volkanovski for the third time, having lost the previous two fights against the champion. This weekend, ‘Blessed’ will hope to reclaim the belt that he lost to his opponent in 2019.

Additionally, the talent-filled card boasts an appearance from Sean O’Malley. The popular figure rounds out the main card, where he will fight #9 ranked bantamweight Pedro Munhoz.

With such mouth-watering battles to look forward to, here is how you can catch all the action.

The UFC 276 main card will start at 3am UK time on Sunday, July 3. Unfortunately, it is another late one for British MMA fans. However, there will be plenty of time to warm up to the action.

Early prelims start at 11pm on Saturday, July 2, with prelims hitting the octagon from 1am on July 3. Therefore, viewers can enjoy hours of great action before Adesanya and co. enter the fray for the main event.

As ever, BT Sport will broadcast the coverage of a UFC event for UK audiences. As a result, you will need a BT Sport subscription in order to catch the action.

Currently, the broadcaster is running a Monthly Pass that costs £25 a month. You do not need to be a BT Broadband customer in order to have this, either.

With the pass, you can watch BT Sport via your smart TV, Fire stick, or any device of your choosing.

The event will be on the channel BT Sport 1. Fall asleep or miss the fights? No worries. The BT Sport app has a full card replay available immediately after – so you can catch up whenever you like.

It is also worth mentioning that the prelims are available to view on UFC Fight Pass. This is also the sole place where you can watch the early prelims, if you fancy it. UFC Fight Pass costs £6.99 a month, or £71.99 a year, on a subscription that you can cancel anytime.

Francis Ngannou set for big return to UFC in January