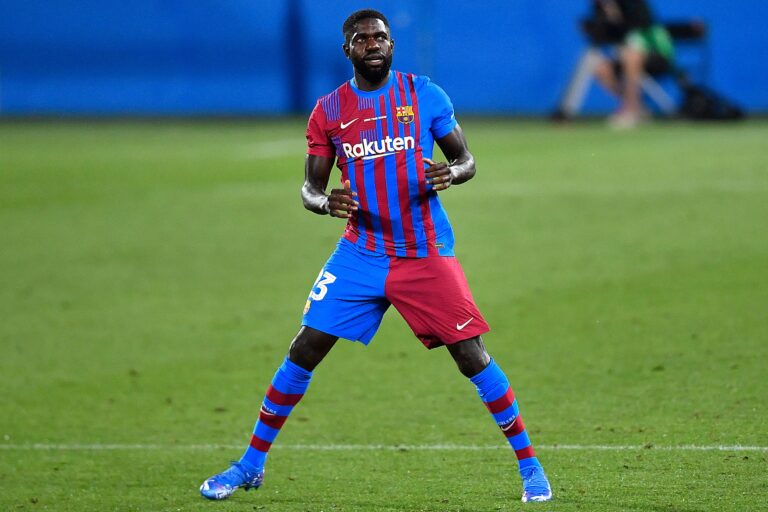 Barcelona defender Samuel Umtiti elected to skip his club’s Joan Gamper Trophy celebrations after being booed by his own fans following his appearance as a substitute.

Barca beat Juventus 3-0 at the Estadi Johan Cruyff in the annual friendly match, in which the Spanish giants invite a club to play against them.

2,924 fans entered the stadium to watch Ronald Koeman‘s side triumph, just three days after the announcement that Lionel Messi would be departing the club.

LaLiga regulations on player registration meant that Barca could not extend Messi’s contract.

New signing Memphis Depay opened the scoring, before Martin Braithwaite and Riqui Puig struck in the second half.

Barca made three substitutions just after the hour mark, including Umtiti.

Umtiti booed by own fans

Upon his entrance to the pitch, however, he was booed by his own fans – who continued to jeer at him whenever he touched the ball.

The 27-year-old rejected Barca’s offer to terminate his contract in July, with the Spanish giants battling to reduce their wage bill.

In a press conference on Friday, the club’s president Joan Laporta said they are spending 110% of their income on player wages.

That has meant they have been scrambling to seal player departures. Junior Firpo was sold to Leeds, Jean-Clair Todibo to Nice and Juan Miranda to Real Betis. Francisco Trincao moved to Wolves on loan with an obligation to buy at the end of the season.

Barca offered contract terminations to Umtiti and Miralem Pjanic, both of whom rejected the proposals.

According to a report from Marca, the club wanted Pjanic to give up around 50 million euros, and Umtiti around 35.

The French defender, who signed for Barca from Lyon in the summer of 2016, has two years left on his current contract.

And despite suffering from injury problems in recent years, he is now back in contention to feature in Koeman’s side if he does indeed remain at the club.

His appearance off the bench against Juve was filled with boos – so much so that when the club lifted the trophy after the match, he elected to skip the celebrations.

Journalist Josep Soldado said he wasn’t in the group picture when the Gamper trophy was awarded.

Barca kick off their 2021/22 LaLiga campaign on August 15 when they take on Real Sociedad at the Nou Camp.