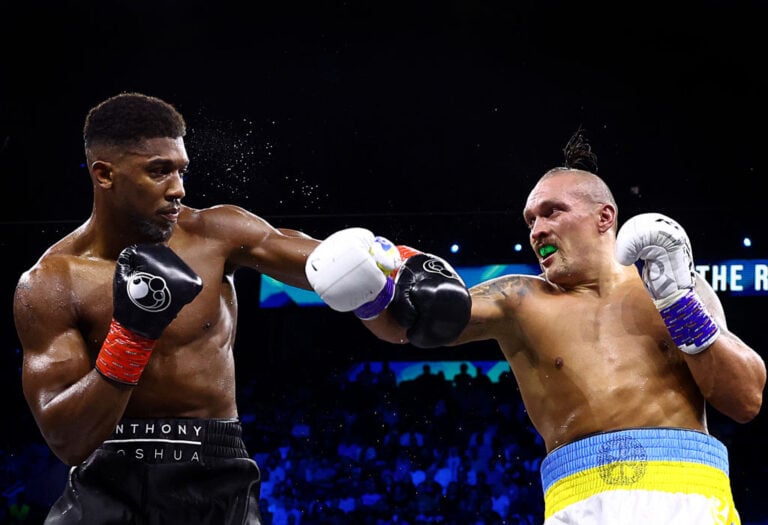 Although the right man won, the scorecards for the Oleksandr Usyk and Anthony Joshua rematch have left fans furious.

On August 20, the pair of heavyweight titans met in an eagerly anticipated rematch. Following the first fight, the boxing public wondered whether AJ could do anything differently. And it turned out he could.

The Brit turned up significantly better, and more determined, than the first time around. However, it still wasn’t enough to defeat the Ukrainian wizard.

Despite moments of success, Joshua couldn’t solve boxing’s hardest puzzle, and thus had to surrender to the fact that his time at the top has come to an end. However, he needn’t take any shame. So far into the two-weight world champion’s career, nobody has come up with the ingredients to beat him.

Usyk has outrageous footwork, an unbelievable boxing IQ and an inner determination as fierce as any heavyweight who has come before him. Aside from a rocky ninth round, the southpaw cruised through the contest. However, when Michael Buffer read out the result, fans gasped in disbelief as Glenn Feldman’s card was revealed.

The American judge had AJ up 5-1 at the halfway stage and ultimately scored the bout 115-113 in the former champ’s favour.

This has left the boxing community up in arms.

Ring Magazine journalist, Michael Montero, claimed, above a photo of the official scorecard: “Glenn Feldman should be suspended indefinitely. No more of this “he had an off night” s**t. This is not the first time. Nobody – and I mean NOBODY – had Joshua winning this fight. Feldman was brought in for a reason.”

Furthermore, ex-world champion Barry McGuigan tweeted: “Bull s**t, yes we know there were close rounds, but that’s their f***ing job. Glenn Feldman has been judging at the highest level for a long time, even people with elementary boxing knowledge could see that Usyk was winning the majority of rounds #notgoodenough.”

To make matters worse, had Steve Gray given the last round to Joshua, then we would have a draw on our hands. The outrage surrounding the cards, resulted in Rob Tebbutt of ID Boxing confronting Feldman after the final bell.

Due to the frequent nature of controversial scorecards, pundits have questioned whether officials should have to give interviews to explain their decisions. On this occasion, the journalist made sure to ask the question everyone wanted an answer to.

He said: “How did you score that fight for Anthony Joshua, Glenn?”

However, rather than answer, the American passed Tebbutt over to his attorney, who claimed that his client scored the bout how he saw it.