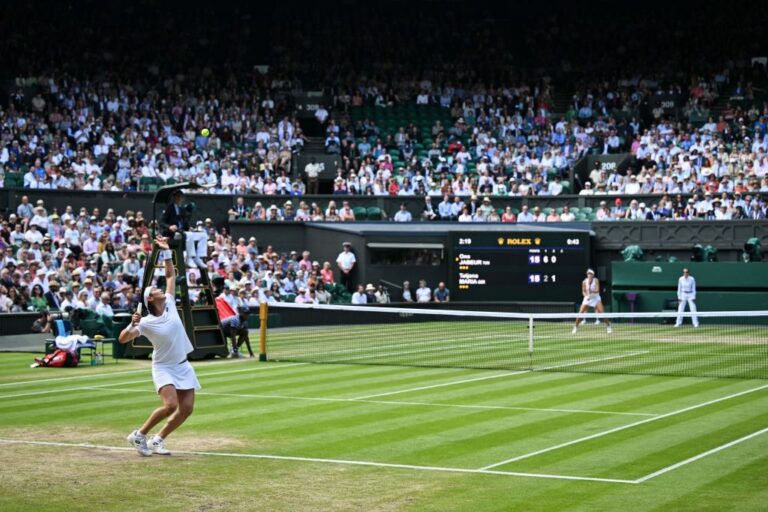 As the 2022 edition of Wimbledon reaches the business end of the action, there is a lot of prize money – as well as tennis immortality – on the line. But just how much will this year’s most successful entrants earn?

In the women’s singles competition, three semi-finalists are playing in their first grand slam last four. Simona Halep booked her spot in the semis with a convincing straight-set victory over Amanda Anisimova. In contrast, all the other victors went to three sets.

Both Elena Rybakina and Tatjana Maria fought back from a set down to reach the semi-final. Meanwhile, Ons Jabeur dominated her second and third sets after losing the first 6-3. In the penultimate round before Championship Sunday, Jabeur takes on Maria, with Halep playing Rybakina.

The men’s semi-finalists also showed resolve in their last-eight matchups, with three of the four going the full five sets. Nick Kyrgios was the outlier, winning his quarter-final in straight sets.

Brilliantly, the British crowd has someone to cheer in the last four. Cameron Norrie beat David Goffin, setting up a semi-final against Novak Djokovic as a result. The reigning champ overcame Jannik Sinner in five sets to reach yet another grand slam semi.

Similarly, Rafael Nadal came from behind and battled injury to reach the last four. He will play against Nick Kyrgios, who, like Norrie, plays in his first Wimbledon semi-finals.

But how much has each semi-finalist earned?

For 2022, the Wimbledon prize money fund enjoyed a boost. The total pool of money stands at £40.35 million, per Sporting News – a 15% increase on last year’s pot. Additionally, it beat the previous record for the biggest prize money fund by 6%. The 2019 edition previously held the record.

Even reaching the first round is lucrative, as players get £50,000 for making it to the draw. The amount steadily increases round-by-round, too. But the real money flows at crunch time.

The 2022 Wimbledon semi-finalists in both the men’s and women’s singles tournaments will bank a whopping £535,000 in prize money. However, doubles tennis is not so lucrative.

According to The Independent, men’s and women’s doubles pairs receive £135,000 for reaching the last four. For mixed doubles, it is even lower; they get £31,000 prize money.

Nevertheless, the singles players enjoy quite the payday. What if they make it to Championship Sunday, though?

Singles stars make at least a million should they play at Centre Court for the final. This year, the runner-up receives £1,050,000 – plus a trophy to take home. Meanwhile, the victor gets to walk away with a cheque worth double that.

This year, winners at SW19 receive an incredible £2 million for their hard work, as well as a place in the history books. This is quite the increase compared to 1968. Back then, the male and female winners got just £2000 and £750 respectively.

Importantly, victors of the men’s and women’s tournaments receive equal prize money – an uncommon feature of the sports world.

Tennis’ best players will compete for the Gentlemen’s Singles Trophy and Venus Rosewater Dish at the end of this week. However, the financial incentives mean that there is so much more at stake.