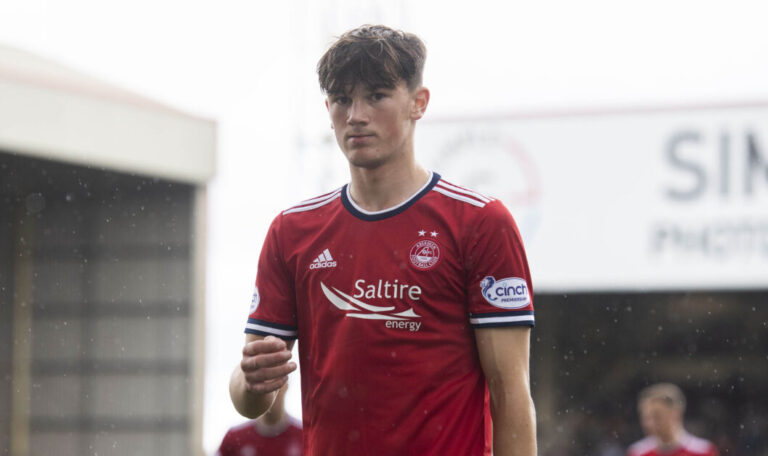 Scotland have a track record of developing top-class full-backs in recent years – and Calvin Ramsay may soon be another to add to the list.

Robertson started at local side Queen’s Park, progressing through their youth system. In the summer of 2013, he moved on to Dundee United.

He made his English football debut with Hull City, impressing sufficiently to earn a move to the Reds.

Tierney, meanwhile, signed for Celtic at the age of seven. He climbed the ladder to the first team and became one of the star players in the Scottish Premiership. The left-back wore the captain’s armband on numerous occasions before leaving in 2019 to join Arsenal.

How Calvin Ramsay could become Scotland’s next star defender

If reports from the Daily Record do indeed come true, Aberdeen right-back Calvin Ramsay will be afforded the opportunity to follow in his compatriots’ footsteps.

The 18-year-old has heavily impressed in the Scottish Premiership this season. He has made 12 league appearances, firmly establishing himself as first-choice in his position in the process.

Stephen Glass’s side will now have to fend off interest from multiple Premier League clubs in January. It is reported that Everton, Manchester United and Liverpool are keeping a close eye on Ramsay’s progress. It is Leicester, however, that are reportedly the keenest to sign him.

A move to the Foxes would make both short and long-term sense for the 18-year-old. With Ricardo Pereira out with a broken leg, and James Justin still not back from a serious knee injury suffered in February, Ramsay could compete for a first-team place straight away.

Everton, meanwhile, have been weak in terms of squad depth at right-back for several years. Seamus Coleman is a long-term stalwart, but the Irishman is now 33, and there may come the point soon where he cannot play every game.

Liverpool have created a pathway for young players to shine, such as Curtis Jones, Tyler Morton and Robertson himself.

As mentioned above, Ramsay has been caught the eye consistently in the Scottish Premiership this term, despite missing the last two months through injury. The 18-year-old returned to the side on December 22, then played 80 minutes of Aberdeen’s 2-1 victory over Dundee on Boxing Day.

It is his attacking statistics that stand out the most. He has registered four assists in his 12 appearances from right-back. Only three players in the entire division – James Tavernier (10), Tom Rogic (5) and Anthony Ralston (5) – have recorded more.

As per WhoScored, he has also completed an average of 2.5 key passes per game. That puts him joint-third on the overall league chart and highest amongst his team-mates. He also registers within the top 25 for dribbles completed (1.1).

Has Calvin Ramsay been called up to the Scotland squad?

Not yet. Ramsay hasn’t made an international appearance for the senior Scotland squad, but he has appeared at various youth levels.

He most recently featured for the under-21 squad in their 1-1 draw against Turkey back in September. Scotland boss Steve Clarke is impressed by the youngster, but adds he may need to bide his time.

He said: “Ramsay is coming through. But at 18 years of age, let’s give the boy time to settle into the Aberdeen team, settle into the Scottish Premiership and the under-21 squad.

“He can get some games and minutes under his belt. As I say, it’s a position that is suddenly starting to look a little bit healthier than it was a couple of years ago.”

If Ramsay gets his Premier League move, Scotland fans may be able to look forward to seeing him in the national team shortly.