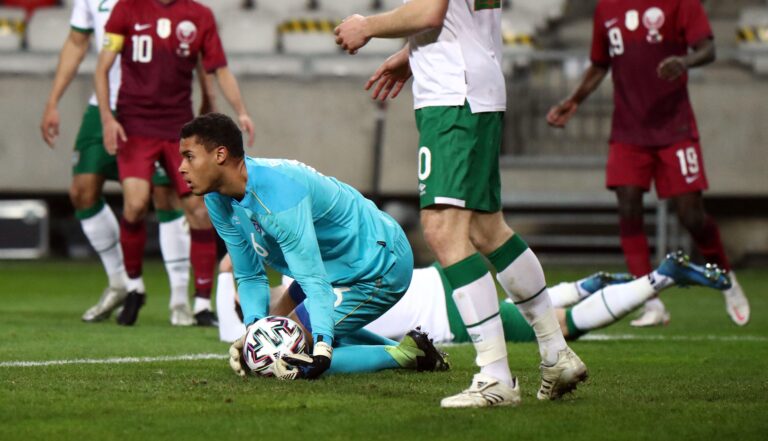 Cristiano Ronaldo made all the headlines for his game-changing brace against Republic of Ireland last night – the first goal of which took him past Ali Daei’s international goal record.

His first goal came on 89 minutes, when he guided an unstoppable header into the bottom corner to level the scores at 1-1.

His second goal was another header that was perfectly directed into the same corner in the sixth minute of injury time.

That meant heartbreak for Stephen Kenny’s Republic of Ireland side – although it wasn’t all bad news.

Facing a team 39 places above them in the FIFA World Rankings, Kenny’s men frustrated Portugal for large parts of the evening.

They were also indebted to a superb penalty save from goalkeeper Gavin Bazunu, who kept out Ronaldo with a diving stop shortly before half-time.

It was only the fifth time the young shot stopper has ever played for Ireland at senior level. Let’s take a more in-depth look at his career so far:

Starting out & move to Manchester

Bazunu started his career in his home country, quickly rising through the age groups at Irish Premier League side Shamrock Rovers.

In his first four appearances at senior level, the goalkeeper kept four clean sheets – catching the eye of big clubs in the process.

It was Manchester City who swooped in to sign him as a 17-year-old in February 2019.

In his first full season with the U23 side, Bazunu made a total of 14 appearances as City finished eighth in the curtailed Premier League 2.

At the beginning of the 2020/21 season, Bazunu was loaned out to League One side Rochdale, who were under the stewardship of future City U23 boss Brian Barry-Murphy.

Upon completing the signing, Barry-Murphy said the goalkeeper was “extremely talented” and “destined for great things”.

The Irishman made his senior English football debut in a Carabao Cup tie against Huddersfield, which Dale won 1-0.

Bazunu’s new side would, however, occupy the lower reaches of the table for much of the season, and were relegated on the penultimate weekend of the campaign.

The side certainly couldn’t be blamed for a lack of entertainment. The 46 games involving Barry-Murphy’s side saw 139 goals scored – more than three goals a game.

Bazunu made 29 starts for Dale over the course of the season, keeping five clean sheets in all competitions.

He was awarded a first senior call-up by the Republic Ireland in March 2021, featuring in the World Cup qualifier against Luxembourg and the friendly against Qatar.

Upon his return to Spotland, Barry-Murphy elected to rest him for the League One clash against Ipswich.

His replacement in goal, Jay Lynch, kept his place in the side for the remainder of the season, with Bazunu not making another appearance for Dale before returning to City.

Upon his return to City at the beginning of the summer, club chiefs looked to loan Bazunu out again.

Meanwhile, they were impressed with his development under the stewardship of Barry-Murphy – one of the reasons why, according to The Athletic, the club swooped to appoint Bazunu’s former manager as their U23s coach.

The 19-year-old’s next assignment was a season-long loan to Portsmouth.

He made his debut for the club in a League One fixture against Crewe Alexandra last month, and kept a clean sheet in a 2-0 victory.

“It is very important to us and he is very confident in that moment.

“There’s so much faith in him that he can be a real protoganist in our attacking play, despite wearing the number one.”

With three years remaining on his City contract, Bazunu certainly looks like a goalkeeper to watch in the future – and, indeed, in the present.