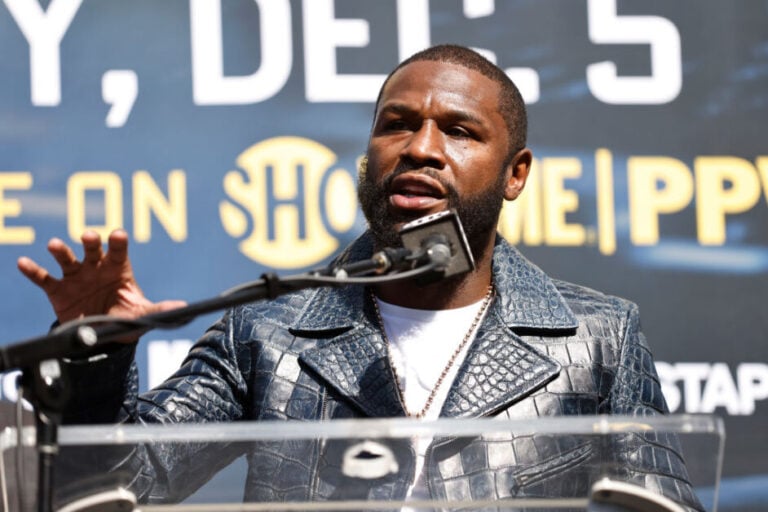 Floyd Mayweather reportedly could return to the ring to take on Rashed ‘Money Kicks’ Belhasa in a monster event in Dubai.

The generational sporting talent took to Twitter recently to tease that he would be making another return to boxing.

Since his last exhibition bout with social media icon Logan Paul in June, the rumour mill has gone wild with potential future adversaries for boxing’s biggest draw. His former friend turned rival 50 Cent is desperate to end his feud with Mayweather in the ring.

During an interview with V-103’s The Morning Culture, he admitted that there’s nobody he’d rather fight.

But in terms of real boxing contests, fans are still drooling over potential rematches with legends like Manny Pacquiao and Oscar De La Hoya.

There is currently one man who appears to be the favourite to secure the monster payday next.

Rashed Belhasa has acquired a staggering 3.21 million subscribers during his time as a content creator on YouTube. While most 19-year-olds debate what to do with their lives, this young man seems to have it all figured out.

Belhasa is the son of construction mogul Saif Ahmed Belhasa, who is worth around £4 billion. The superstar lives life to the fullest in a massive mansion in the UAE. He even has a private zoo filled with over 500 amazing animals.

He has used his father’s wealth to acquire the friendships of celebrities such as Paul Pogba, Luka Modric, Lionel Messi and Anthony Joshua, who have all visited his wildlife park.

Belhasa loves naming his animals after pop-culture sensations. There are two giraffes named after Sesame Street’s Bert and Ernie. When Paris Hilton visited the zoo, she found that a monkey had been named after her.

Ironically, Mayweather also shares his surname with one of the Dubai native’s animals.

Belhasa captures his wealthy life on camera and posts the videos onto his channel.

But can he fight?

‘Money Kicks’ has displayed his skills in two previous amateur bouts in Dubai. His first fight was against fellow influencer Anas Elshayib.

In most cases, that wouldn’t be anywhere near enough to secure a bout with someone of Mayweather’s quality. But at this stage of the boxing career of ‘Money’, a contest with Belhasa would undoubtedly provide him with a massive payday.

His potential next opponent has at least won a fight, unlike his last one. It could therefore be argued that Belhasa has a higher skill level than Logan Paul. But it must be remembered that the 6ft 3in giant is significantly bigger than the Emarati.

Read: Five of the worst ends to fight careers

Mayweather is impressed by what he has seen from the man he could potentially share the ring with next.

While posing in front of a helipad during his trip to the UAE, Mayweather said: “I spoke to [my advisors] about ‘Money Kicks’. We don’t really know. He is from Dubai. It is going to be great. It will be a very special crowd.

“There won’t be too many people. So, if you get the chance to come here, you must know that you are very special. ‘Money Kicks’ is doing big things, and I like what I am seeing.”

However, although talks are ongoing, it is unclear as to whether the fight will definitively take place. Therefore, fans will have to wait to find out whether this intriguing match-up will happen – but there is seemingly plenty of appetite from Mayweather’s side.