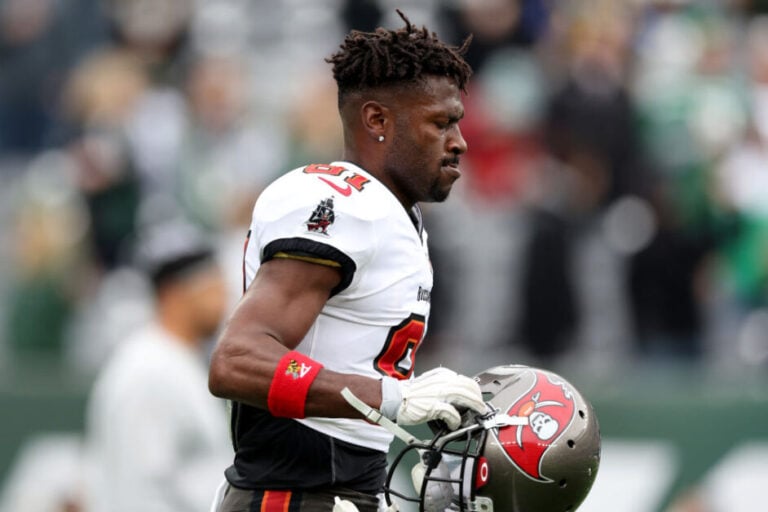 The Buccaneers were down 24-10 against the low-ranked New York Jets halfway through the third quarter. It was a poor display from the Bucs, who held an 11-4 record this season to the Jets’ 4-11.

During a timeout, a visibly frustrated Antonio Brown took off his jersey and pads. Stripped down to his pants, Brown jogged out of the MetLife Stadium.

Brown’s unexpected exit ended up setting Tampa Bay in motion. The game would finish with a narrow 28-24 victory for the Bucs, but the team wasn’t exactly in high spirits after the win.

ESPN sources have confirmed that Brown didn’t fly home with the rest of the team.

NFL legend Tom Brady, now with the Buccaneers, voiced his concern about Brown: “That’s obviously a difficult situation. We all love him and care about him deeply.”

Is Brown still with the Bucs?

Brady and Brown won’t be playing together anytime soon. In a post-game interview, Buccaneers coach Bruce Arians confirmed that the wide receiver is no longer a member of the team.

Arians said: “He is no longer a Buc. That’s the end of the story. Let’s talk about the guys that went out there and won the game. I’m not talking about him. He’s no longer part of the Bucs.”

Not so long ago, Brown was one of the best wide receivers in the NFL. The Miami native has had six 100-catch seasons throughout his career. His 136 mark in 2015 is the fourth-highest in league history.

Brown’s career has been on a steady decline since 2018. Injuries have plagued him, only allowing him to participate in just 16 RS games in the past three years.

After this last incident, it’s hard to see Brown going back to being one of the best route-runners in the NFL.

The Buccaneers still have Brown’s one-year, $3,100,000 contract on their books. It remains to be seen whether he will be traded.

Antonio Brown is no stranger to trouble

Brown has been involved in several incidents throughout his career.

In April 2018, the wide receiver started throwing furniture off the balcony of his Florida apartment. Brown’s fit of rage almost killed a 22-month child. He was made liable for damages after a controversial court deposition.

Brown got in legal trouble shortly after. In 2019, his former trainer Britney Taylor sued him for sexual assault. Brown ended up avoiding court by agreeing on a settlement with Taylor.

Last year, Brown pleaded no contest in a battery and burglary case, which got him two years of probation. He was also ordered to attend counselling and spend 100 hours doing community service.