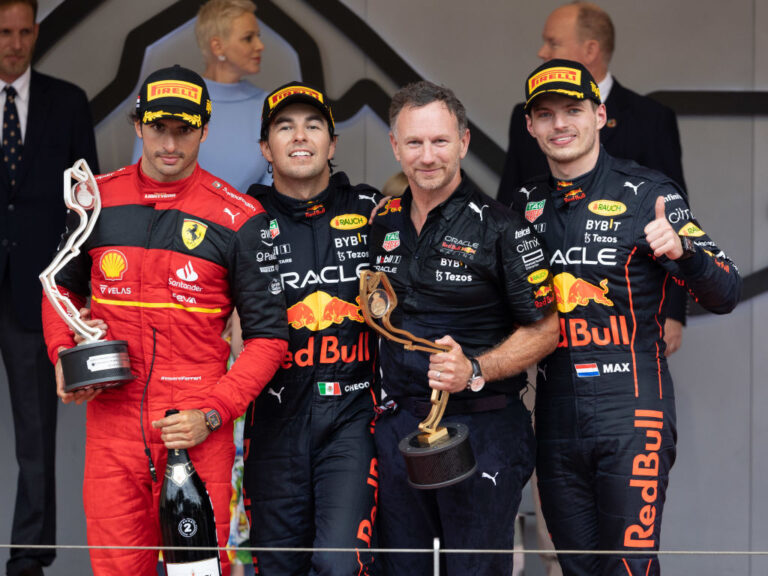 Max Verstappen avoided a post-race penalty at the Monaco Grand Prix after the FIA threw out a protest from Ferrari over a potential pit exit infringement.

It was a race run in changeable conditions. The FIA delayed the start of the race after a power outage affected the start systems. This also forced a rolling start at every interval, instead of the usual standing start.

After the race eventually began, Charles Leclerc led from Sainz, Verstappen and Perez. However, with the track quickly drying, pit strategy was of the utmost importance.

Verstappen, Perez and Leclerc went from wet tyres to intermediates, and then pitted for dries. Sainz, meanwhile, went straight from the wet to the dry compound.

The result was Perez taking the race lead, ahead of Sainz. And after another red flag for a heavy crash involving Mick Schumacher, the Mexican led the field to the chequered flag to secure an emotional Monaco victory.

But the drama, however, wasn’t over just yet.

After the race, Ferrari decided to launch a protest against Perez and Verstappen. The reason was an alleged pit exit procedure infringement.

Ferrari team principal Mattia Binotto told Sky Sports: “We are disappointed because we think there was a clear breach of regulations on the two Red Bulls for going on the yellow line exiting the pits.

“I think it was not close. He was on the line. And if you look at the sporting code, the wording says crossing.

“Then we had a clarification at Turkey in 2020 to avoid any discussions and, if you look at the race driver notes, it says staying to the right. So staying on the line is breaching the race director notes.”

The stewards dismissed the protest on Perez, calling it “unfounded”. Ferrari also conceded that no part of Perez’s car was to the left of the pit exit line.

They also dismissed the protest against Verstappen – although the reasoning behind this was slightly more complicated.

Why did Max Verstappen not get a penalty?

Live broadcast footage from Max Verstappen’s wide T-cam shows that his car was exceptionally close to crossing the line. Most fans believed that his left front tyre did cross the line.

It is worth noting that the FIA will have had numerous available angles to assess whether Ferrari’s protest would be successful. But, in the meeting, both Ferrari and Red Bull accepted that Verstappen’s left tyres did cross the line.

So why did he not get a penalty?

There are two main reasons. The first is that the FIA’s sporting code was changed ahead of the 2022 season to reflect a new ruling when it comes to pit lane infringements.

It reads: “Except in cases of force majeure (accepted as such by the stewards), any tyre of a car exiting the pit lane must not cross any line painted on the track at the pit exit for the purpose of separating cars leaving the pit lane from those on the track.”

Therefore, as Verstappen’s entire tyre did not cross the line, the Dutch driver did not breach the sporting code. However, had the offence occurred last season, when the regulations stated that any part of a car must not cross the line, he likely would have been penalised.

The other issue relates to a ‘contradiction’ between the race director notes and the sporting code. Before the start of the weekend, race director Eduardo Freitas wrote to all teams and drivers regarding the rules for the race.

However, in this instance, the race director notes were ‘cut and paste‘ from last year’s regulations, which didn’t reflect the pit exit rule change. As the race director cannot take precedence over the sporting code, the protest was upheld, and Verstappen’s result stood.