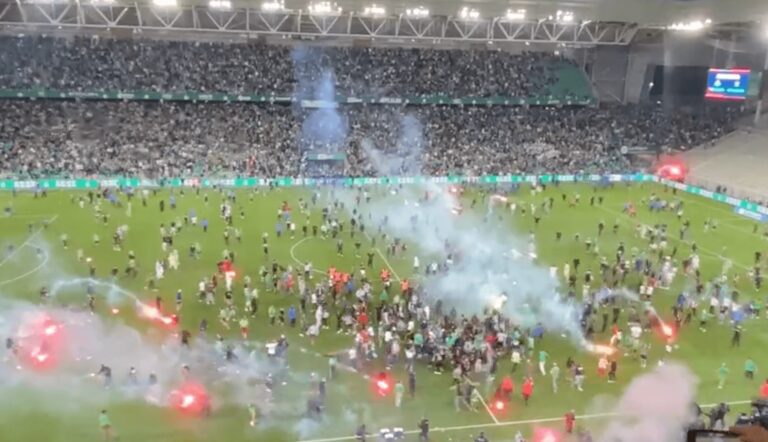 Saint-Etienne fans invaded the pitch after their side’s relegation to Ligue 2 was confirmed and threw flares and smoke grenades at their own players, in the latest scandal to affect French football.

The joint-record 10-time Ligue 1 winners faced Auxerre in the second leg of their relegation play-off at the Stade Geoffroy-Guichard. After a 1-1 draw in the first leg, Saint-Etienne knew they needed to win to ensure their place in Ligue 1 for next season.

But Pascal Dupraz’s side went behind on 51 minutes to Hamza Sakhi. Then, on 76 minutes, midfielder Mahdi Camara grabbed the all-important equaliser to take the game to extra time.

Neither side could find the winner in the allotted 30 minutes, meaning the game went to penalties. And after Donovan Leon saved Ryad Boudebouz’s opening penalty, Auxerre captain Birama Toure had the chance to seal the deal.

He did precisely that, calmly placing the ball in the corner of the net. Auxerre players were jubilant. They mobbed goalkeeper Leon, and began to celebrate their achievement. However, they were quickly forced to leave the pitch.

The players had to evacuate because hordes of angry Saint-Etienne fans ran onto the pitch, clutching flares and smoke grenades.

To their credit, some of the stewards realised the gravity of the situation, and escorted some of the home players off the pitch. But they were powerless to stop the siege of fans.

One by one, flares were thrown across the pitch and towards the dugout. In addition, smoke grenades were also thrown towards the same area.

Furthermore, BT cameras inside the tunnel show several players clutching their heads as they walk back to the dressing room. Another has his head in his hands. That suggests that those players could have been hit by one of the missiles thrown, although this is yet to be confirmed.

In addition, RMC reported that fans burned seats in the ground before the fire brigade put them out.

Saint-Etienne initially released a club statement after the chaos but did not mention the post-match violence. This morning, however, they have condemned the fans involved.

They wrote (quotes via The Athletic): “Despite an exceptional and reinforced plan of nearly 500 officers, many supporters invaded the pitch at the final whistle of the match against AJ Auxerre.

“Some were then guilty of several degradations and acts of violence towards the players, the security agents, the police and the public of the Pierre-Faurand stand.

“ASSE strongly condemns these acts, gives its full support to those affected and will initiate the necessary legal proceedings.”

This season, Saint-Etienne has been sanctioned several times by the French football governing body, LFP.

In October 2021, the French giants were told to play games behind closed doors, whilst they played the Auxerre clash with one stand closed due to crowd trouble against Monaco.

The club will likely receive a significant punishment for their latest crowd incident.