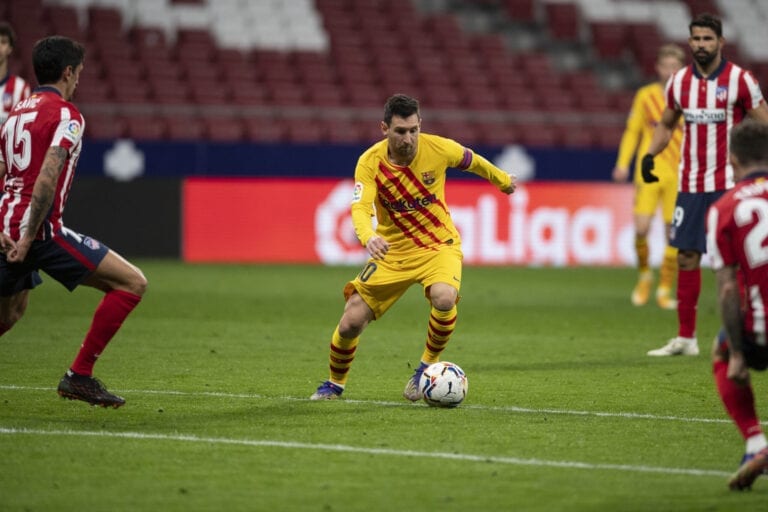 The race for the LaLiga title has, to this point, been one of the closest fought in recent memory.

Atletico Madrid have led that race for large parts of the season, and whilst they are still top, other teams remain hot on their heels behind them.

El Clasico rivals Real Madrid and Barcelona sit just two points behind them in second and third positions respectively, and fourth-placed Sevilla aren’t yet out of the race either.

It could all come to a head this week. Atletico travel to the Camp Nou to take on Barca, whilst Real host Sevilla at the Alfredo di Stefano Stadium.

Here’s why this weekend’s set of fixtures could be the biggest of the LaLiga season so far:

Messi and Suarez reunite at Camp Nou – on opposing sides

Lionel Messi and Luis Suarez, alongside Neymar, formed arguably the most potent trio in world football during their spell together at Barcelona.

Suarez signed for Barca from Liverpool in 2014, scoring 198 goals in all competitions in an illustrious six-year spell with the club.

Off the pitch, Suarez and Messi would become great friends. Their children both went to the same school and their families built a close relationship as well.

On the pitch, they won an astonishing 13 trophies together, including four LaLiga titles and the Champions League.

But the Uruguayan’s stint at Barcelona ended in dramatic fashion last summer, with the striker being sold to Atletico Madrid under controversial circumstances.

The goals have continued to flow for the 34-year-old. Suarez has 19 goals in 28 LaLiga appearances this term for Diego Simeone’s side.

Messi, meanwhile, has been typically unstoppable this season, with 28 goals to his name.

The Argentinian has scored an incredible 21 LaLiga goals in 2021 alone.

Both Messi and Suarez have never faced each other at club level before, with COVID-19 ruling Suarez out of the reverse fixture which Atletico won 1-0.

Simeone’s side have never won at the Camp Nou during the Argentinian manager’s time in charge – they’ll be desperate to change that on Saturday.

Will Barcelona banish the memories of 2014?

Simeone may never have won at Barcelona as a manager, but his Atletico side did secure the LaLiga title there with a 1-1 draw back in 2014.

That game occurred in similar circumstances to Saturday’s encounter, although there was a finality to the game that day – it was played out on the final day of the season.

Both sides could have won the championship on the day, with Atletico going into it with the upper hand as far as the table was concerned. The gap between them stood at three points.

Diego Godin was the hero, scoring a header to secure the title for Simeone’s side, with Gerardo Martino’s Barca three points behind in second place.

A win for Atletico on Saturday would take them five points above their opponents at the top of the table with just three games remaining.

Barca, meanwhile, could overtake their rivals and go top themselves with a victory of their own – for just over hours at least.

There’s an added layer of importance attached, in that Atletico currently hold the edge in the head-to-head tiebreaker between the two sides.

It’s fair to say there’s a lot riding on this one. If Simeone can break his Camp Nou managerial duck, Atleti will be a strong position to win their first title since that famous afternoon in 2014.

It’s been a nightmare week for Real Madrid so far, having been knocked out of the Champions League at the semi-final stage by Chelsea.

But it could end on a positive note, at least as far as LaLiga is concerned.

With Barcelona and Atletico Madrid playing 24 hours earlier, Real would go top if they win and Atletico lose, or Simeone’s side draw and there is a five goal swing in Real’s favour.

The team standing in their way is Sevilla – managed by former Real coach Julen Lopetegui.

His tenure as Real boss lasted just 10 games, which coincidentally ended with a 3-0 defeat against his current employers.

And Sevilla are still mathematically in the running for the title. If results go their way, they could end the weekend four points behind the league leaders with three games to play.

Can the Basque-born coach guide his team to victory and keep Sevilla in the title race – and potentially knock Real out of the running?

The last season Real Madrid failed to win a trophy of any kind was in 2012/13.

Should they fail to claim LaLiga, however, they will go trophyless again in this campaign.

Sunday’s clash with Sevilla is an important one for Zinedine Zidane‘s side. They have welcomed back Eden Hazard – whose idol growing up was the Frenchman – as well as captain Sergio Ramos in recent weeks.

And whilst Hazard hasn’t enjoyed the greatest of spells in Madrid since arriving in 2019 due to injuries, he has shown in the past that he has the quality to deliver when it matters most.

Ramos, meanwhile, is yet to sign a new contract – his current one expires this summer – meaning this campaign could be his last in a Real shirt.

Having recovered from a knee injury that has ruled him out of LaLiga action since March, the Spaniard will be desperate to lead his side to domestic glory once again.

They also have Karim Benzema in their ranks. The Frenchman has been in outstanding form this campaign, firing in 21 goals and eight assists in his role as Real’s leading marksman.

Come the end of the weekend, the picture at the top of the table could well be far clearer.