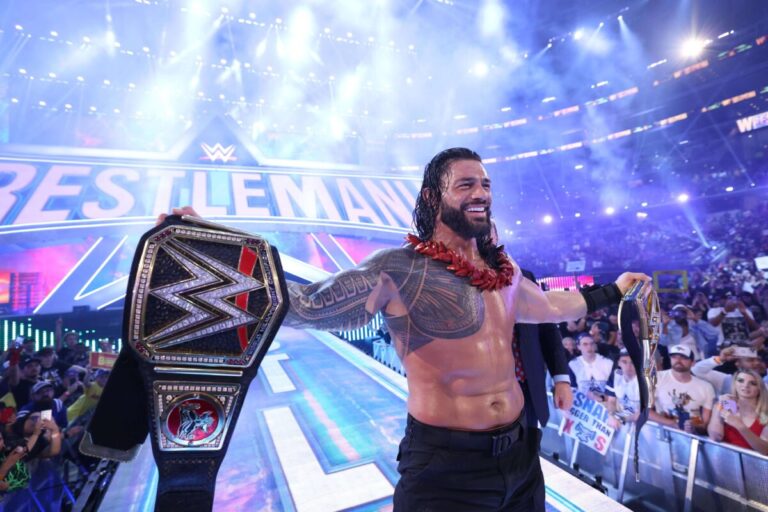 Roman Reigns is currently the Undisputed WWE Universal Champion, a title he has held since WrestleMania 38 – and new reports have emerged as to the reason why Reigns unified the titles.

Reigns, who was then the Universal Champion, took on WWE Champion Brock Lesnar in what was billed as a ‘winner takes all’ match.

The ‘Tribal Chief’ secured the gold, performing a Spear to his stricken opponent before landing the pinfall.

And so started an era of renewed dominance by Reigns, who was now the world champion for both Raw and SmackDown.

Some fans, however, have begun to question the reasoning behind unifying both titles. That is because Reigns has been appearing less frequently on televised broadcasts recently.

Why is Roman Reigns featuring less often on WWE TV?

The ‘Tribal Chief’ signed a new contract with WWE around April or May.

The contract means he can work fewer dates, including house shows. It is similar to the deal that Lesnar has with the company. The ‘Beast Incarnate’ only wrestles a certain number of matches per year.

So far, Reigns is yet to defend his undisputed title. He was not booked for the recent Hell in a Cell premium live event. There is no indication he will be booked for Money in the Bank, either – although that is still to be confirmed. Reigns will, however, defend his titles against Riddle on the upcoming edition of SmackDown.

Explaining his new deal, Wrestling Observer Newsletter‘s Dave Meltzer said (quotes via WrestlingNews): “This is not it for him. But the situation is that he got a new deal, and the new deal is for far less dates.

“I don’t know how many house shows he’s gonna be doing, but it will be much less than the number he’s doing now.

“It’s one of the perks of being there for a while and being valuable there, is you can kind of call certain shots. He’s got the power to maintain the championship and work fewer dates, [like] Lesnar has, and Hulk Hogan used to have.”

Why WWE wanted to unify the titles

New reports have emerged as to why WWE wanted to unify the titles at WrestleMania – and have Roman Reigns hold them.

According to WrestleVotes, a source has indicated that it was understood that Reigns would feature on Raw and SmackDown more prominently with the belts.

That decision certainly makes sense. Reigns is the biggest draw in the company right now, and the wrestler with the biggest star power.

WWE have developed the ‘Tribal Chief’ into an unstoppable force throughout his 600+ day reign as Universal Champion. Having him feature on both shows, as its leading figurehead, would have allowed a range of different storylines to develop.

This is happening now, with WWE building up a feud between Riddle and Reigns. They have also left the door open for the likes of Randy Orton, Shinsuke Nakamura and Drew McIntyre to challenge further down the line.

The only issue is that Reigns hasn’t been seen frequently on Raw or SmackDown to develop these storylines himself. It can be argued that SmackDown, more so than Raw, needs the ‘Tribal Chief’ as a figurehead on its show due to its smaller roster size.

But perhaps the lack of Reigns in action makes those title matches much more special to witness. In turn, the building tension for when he eventually drops the titles can reach fever-pitch levels.