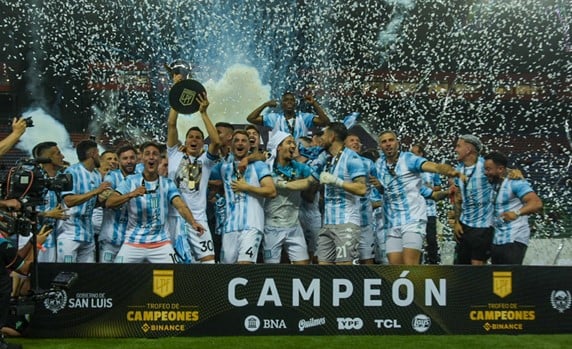 The match between Argentine giants Boca Juniors and Racing Club ultimately saw Boca Juniors unable to finish the game, as they had insufficient players left on the field. As a result, Racing Club won the match 2-1 and claimed the Trofeo de Campeones.

Although a few of the dismissals came from fouls, a large proportion of red cards in the Argentina Champions Trophy final came from on-pitch scuffles.

Argentina Champions Trophy: the how and why of all 10 red cards

Unbelievably, the Final did not get its first red card until injury time at the end of the typical 90. Following a pushing match between the pair, Boca’s Sebastian Villa and Racing’s Johan Carbonero received their marching orders. These two players would not be alone, though.

Then, ten minutes into extra time, Boca earned their second red card. Alan Varela, who was already on a yellow, produced a wild challenge on the edge of the box. So, he too had an early shower.

Down to nine men now, Boca struggled to contain Racing Club, who were trying everything to get the win. After ten minutes of sustained pressure, Racing claimed a last-gasp winner – with the following events causing more red cards.

The goal-scorer for Racing, Carlos Alcaraz, produced an exuberant celebration in front of the rival Boca Junior fans. Unsurprisingly, this caused an angry reaction from both those in the stands and Boca players.

In fact, following Alcaraz’s celebration, a brawl broke out between him and Boca players. According to reports, some of Boca’s squad members grabbed Alcaraz by the ear and threw the ball at him.

After the scuffle had calmed down, Alcaraz got a red card, taking Racing’s total to two. For Boca, however, there were a few more heading down the tunnel. Luis Advincula, Carlos Zambrano, and Diego Gonzalez all saw red for the reigning Argentine champs.

Additionally, Racing’s Jonathan Galvan was dismissed for his part in the fracas. He, Zambrano, and Gonzalez were actually substitutes at the time, so the game could continue.

But it does not end there! A minute later, Boca captain Frank Fabra received a second yellow for a reckless tackle. He then threw down his armband in disgust at the decision.

Finally, to add insult to injury for the world-renowned club from Argentina, Dario Benedetto put Boca on seven red cards thanks to VAR. Overall, Racing added three reds, taking the total to ten.

There were goals in this match, too – if the red cards were not enough excitement.

The champions actually took the lead in the Trofeo de Campeones Argentina Final before losing most of their team to red cards.

Norberto Briasco opened the scoring in the game, cushioning a cross down with his chest before firing home. From this point on, though, it was downhill for Boca.

The match then ran into the craziness of extra time, where Facundo Tello probably ran out of space to write names on his red card.

With penalties looming, though, Racing finally took advantage of their extra men. A brilliant cross found Carlos Alcaraz, who headed home what turned out to be the winner.

After all the red cards were dished out, the referee had no choice but to end the match with a couple of minutes left. This is because Boca Juniors had insufficient players to continue.

Mr Tello is actually one of Argentina’s referees heading to the upcoming World Cup. He will hope that he can keep his cards in his pocket more often in Qatar, I’m sure.