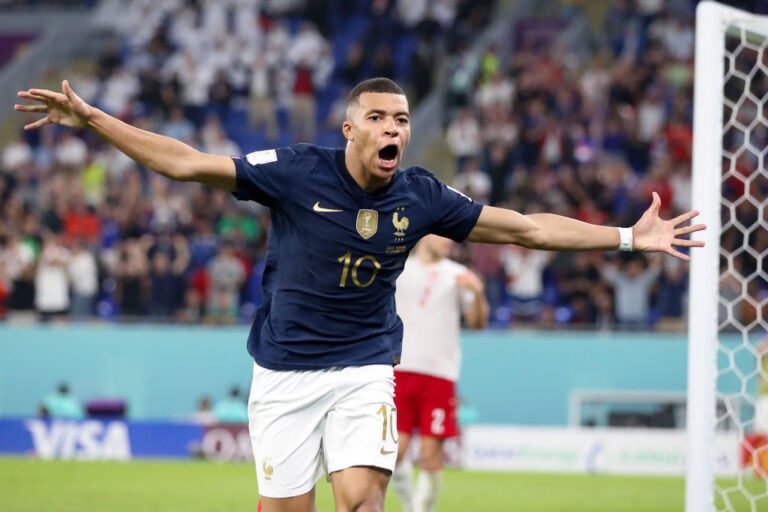 A pulsating set of fixtures last weekend has set up some nail-biting encounters to finish the Qatar World Cup group stage.

The final games of Group A and B will settle the final positions in those groups. Meanwhile, France (Group D) became the first side to qualify for the round of 16. A set of surprise results mean that Groups C, E, and F will go down to the wire, though.

But we start off our World Cup weekend recap with Friday (unsurprisingly), where the home nations had a difficult matchday two.

Friday – Group A and B: Wales suffer devastating defeat

Welsh hopes of reaching the knockout stage suffered a brutal blow after Iran inflicted a 2-0 defeat on Wales. Throughout a game in which they dominated, Iran hit the post twice and had a goal ruled out for offside.

As Wales hung on, a late Wayne Hennessey red card gave Rob Page’s side an uphill battle to claim a result. Ultimately, Iran claimed a deserved win thanks to two excellent stoppage-time goals.

Elsewhere in Group B, the USA and England played out a drab 0-0 draw on Friday night. The match had chances few and far between, with America arguably the more dangerous side.

England will likely be disappointed at their underwhelming performance following their clinical opener. Despite this, they remain in control at the top of Group B.

Similarly, in Group A, the Netherlands also drew their second match after a win in their first game. Louis van Gaal’s side played out a 1-1 draw against Ecuador, where they rode their luck on numerous occasions.

The Netherlands began the match perfectly, with Cody Gakpo scoring after just six minutes. However, Ecuador fought back thanks to a goal from Enner Valencia. The South Americans may rue missed opportunities, such as when Gonzalo Plata hit the bar. Still, the match ended in a tie.

This draw keeps the two countries in a solid position to progress from Group A. For one team, though, their World Cup journey has ended already. Hosts Qatar are already out of their World Cup following a 3-1 loss to Senegal.

Although they scored their first-ever World Cup goal, the African champions proved too strong for Qatar. As a result, they become the worst-performing hosts in the history of the tournament.

Saturday’s action kicked off with a historic victory for Australia. The Socceroos beat Tunisia 1-0 to claim their first World Cup win in 12 years. Thanks to Mitchell Duke’s goal, Australia must avoid defeat against Denmark (and hope Tunisia doesn’t beat France) to progress.

Meanwhile, a fascinating encounter between France and Denmark saw Les Bleus become the first team to qualify for the knockouts. Kylian Mbappe showed his devastating form, scoring both goals for France in the victory.

For Denmark, the defeat was less than ideal, but does not end their World Cup hopes. They need to beat Australia in their last group match to stand a chance of qualifying, in what will surely be a crunch match.

Looking at Group C now, and a pair of 2-0 wins has blown this group wide open.

Firstly, Robert Lewandowski got his first-ever World Cup goal to fire Poland to victory over Saudi Arabia. The Barcelona striker also got an assist for Piotr Zielinski’s strike.

Saudi Arabia missed multiple opportunities in that game, though. They had 16 shots, including Salem Al-Dawsari’s missed penalty.

Saturday night then saw Argentina finally announce themselves to the World Cup – although it took an hour.

Following a tense first half, an inspired Lionel Messi strike gave Argentina a lead on 64 minutes. The Albiceleste’s talisman beat Guillermo Ochoa with a speculative shot into the bottom corner from range.

Argentina youngster Enzo Fernandez then added a wonderful second goal to seal the victory over Mexico. With this win, Argentina still need to beat Poland to ensure safe passage to the round of 16. A draw could be enough if the other result goes their way, though.

On Sunday, Costa Rica put themselves in the race for Group E thanks to a 1-0 win over Japan. Keysher Fuller’s late goal proved the decisive moment in the match as Japan wasted numerous chances at the other end.

The other game in Group E was a huge World Cup-winner showdown to round off the weekend. Spain and Germany played out a pulsating 1-1 draw yesterday evening.

Spain dominated possession throughout the match, and took the lead via Alvaro Morata. However, Germany brought the game back to 1-1 thanks to a thumping strike from substitute Niclas Fullkrug.

With the draw, Germany will definitely need to beat Costa Rica to stand a chance of progressing. Spain, on the other hand, are in a good place. Provided they avoid defeat to Japan, they will go through.

Finally, in Group F, Morocco added their name to the list of shock results at Qatar 2022. The African side beat a despondent Belgium 2-0 in a brilliant performance.

Wolves defender Romain Saiss got his country’s first as Morocco eventually capitalized on their threat at set pieces. Then, in stoppage time, Zakaria Aboukhlal sealed a memorable victory.

Unfortunately, Canada could not cause an upset in the other Group F match on the weekend. Instead, they will be heading home after losing 4-1 to Croatia.

Alphonso Davies claimed a piece of history, though; he scored his country’s first-ever World Cup goal with a great header. But the game went downhill quickly for Canada from here.