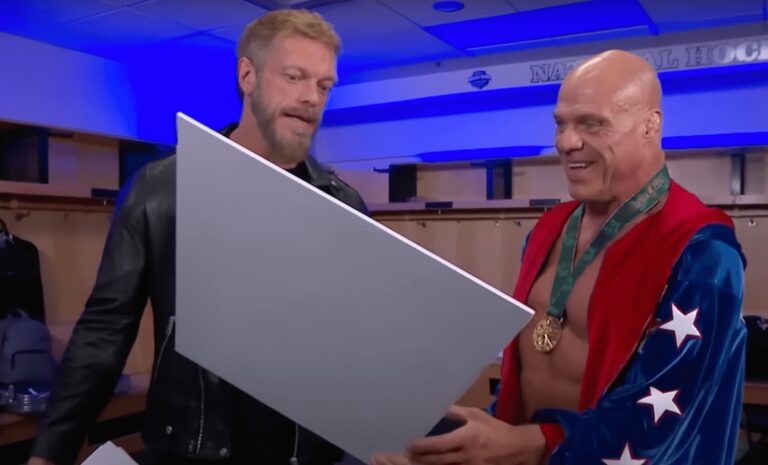 There’s nothing like a bit of WWE nostalgia, and on Monday Night Raw, Edge and Kurt Angle gave fans an epic trip down memory lane.

On August 29, the Olympic gold medallist made his grand return, and wrestling enthusiasts were delighted. As is often the case, the writers utilised his star power to build up their up-and-coming talent.

Angle participated in segments with Alpha Academy and The Street Profits. Later in the show, however, he reunited with fellow WWE Hall of Famer, Edge.

Following a long wait, UK fans finally got the news they hoped for. At WWE Clash at the Castle, ‘The Rated R Superstar’ will team up with Rey Mysterio in an attempt to topple ‘The Judgment Day’.

But while his night mainly revolved around the announcement of his monstrous collision at the first UK premium live event in nearly two decades, fans loved his interaction with Angle even more.

The pair of sporting icons reenacted their classic 2002 skit. It involved Edge passing the five-time world champion a series of pictures, with brutal slams written on the back. This iconic idea ultimately incepted Angle’s ‘You Suck’ chant.

This time around, Edge was slightly nicer, as he gave his friend a plethora of images featuring their greatest moments. But he still found a way to pull an epic prank.

Each cardboard placard highlighted a moment in which he felt he had to apologise for one of the occasions he’d beaten his rival. The joke ultimately culminated in a photo with the words ‘Angle still sucks’ on the other side. However, the former Raw general manager didn’t catch on until the 48-year-old had left the room.

Upon realising he’d been duped, a stressed Angle shouted: “He did it again.”