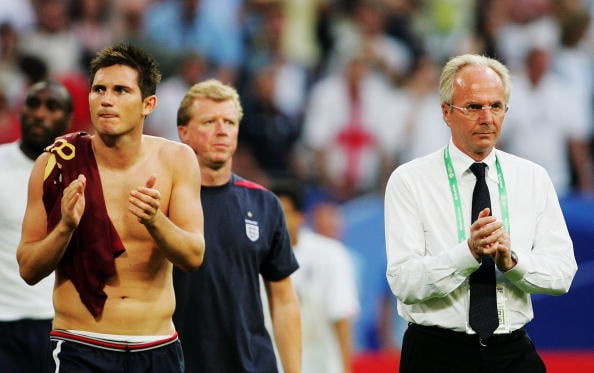 On the 12th of January 20 years ago, Sven Goran Eriksson became the first foreign manager to get the England job. The Swedish tactician succeeded Kevin Keegan and had the pleasure of managing England’s golden generation for five years.

The Swede was not a fan favourite while in charge of England, however, he does in fact have the highest point percentage in competitive matches of all time for an England manager (that is excluding Sam Allardyce who has a perfect 100 percent).

He led England to three successive quarter finals in major tournaments, but many believe that with the crop of players he had he could have done more.

Eriksson had a great start as England manager. He managed to bring England from the bottom of their 2002 World Cup qualifying group back into contention for a place at the tournament.

A run of eight successive wins meant that England had a chance to qualify going into their last group game.

Amongst these eight wins was one of England’s best ever victories as they beat Germany 5-1 at the Olmpiastadion in Munich.

Goals from Steven Gerrard, Emile Heskey and a hat-trick from Michael Owen gave England fans a priceless victory over their old foes.

Despite the good form England had to rely on a piece of magic from David Beckham to secure the place at 2002 World Cup. England trailed Greece 2-1 at Old Trafford late on. Up steps David Beckham who bent an iconic freekick in to equalise and send England to Japan and South Korea.

At the 2002 finals, England qualified from their group in second place. Two draws against Sweden and Nigeria and a 1-0 win over rivals Argentina was enough to send them through.

They breezed past Denmark 3–0 in the Round of 16 setting up a clash against Brazil in the quarter final.

It started well for England who went ahead thanks to Michael Owen. However, Rivaldo levelled the score just before half time.

England were sent packing from the tournament after Ronaldinho’s cross-shot, which is still disputed today, looped over David Seaman in the 50th minute.

As the 2004 European Championships approached it looked like Sven Goran Eriksson had won over his doubters and crafted a feel-good factor around the national team.

England qualified for the tournament comfortably and were unbeaten in the qualifying campaign.

England first game was against France. It looked like England were going to pick up a great 1-0 win after Frank Lampard put them ahead. However, after a missed penalty from Beckham thing fell out of control. Zinedine Zidane scored a late brace to turn the game on its head.

Despite the disastrous start England qualified after wins against Switzerland and Croatia. The performances of teenage sensation Wayne Rooney were lighting up the competition.

England faced the hosts Portugal in the quarter final and got off to the dream start after Michael Owen gave England an early lead. England suffered a blow when the talismanic Rooney had to be subbed after breaking his metatarsal.

Portugal eventually got an equaliser after England failed withstand the Portuguese attacks. England then had a 90th minute Sol Campbell goal disallowed as the referee deemed that goalkeeper had been impeded.

Extra time brought two more goals as Rui Costa put Portugal ahead with a powerful strike. That goal was cancelled out by a close-range finish from Frank Lampard.

The game went to penalties and England’s curse continued. The eccentric Ricardo won the battle of the mind games saving and scoring the winning penalty.

It was the period after the 2004 Euro’s where Sven Goran Eriksson’s came under scrutiny once more. Poor performances and a shock defeat to Northern Ireland put pressure on Eriksson.

The Swede was also involved in a scandal by a news of the world reporter who faked being a Sheik billionaire who was going to buy Aston Villa. Eriksson said he would leave England to manage Villa and leaked a lot of information to the undercover reporter.

England topped their 2006 World Cup group with two wins and one draw, but England were criticised for their average performances.

England scraped past Ecuador in the round of 16 after David Beckham fired home a free kick. This win set up another quarter final against Portugal.

The game was far less entertaining than the quarter final at Euro 2004 and ended 0-0 after extra time. The biggest talking point was that Wayne Rooney was sent off for stamping on Ricardo Carvalho leaving his team with 10 men.

England crashed out of a major tournament on penalties once again as Ricardo upset the England fans once more in the penalty shoot-out.

Do you think Sven Goran Eriksson and the golden generation should have achieved more? Let us know @SPORF on Twitter