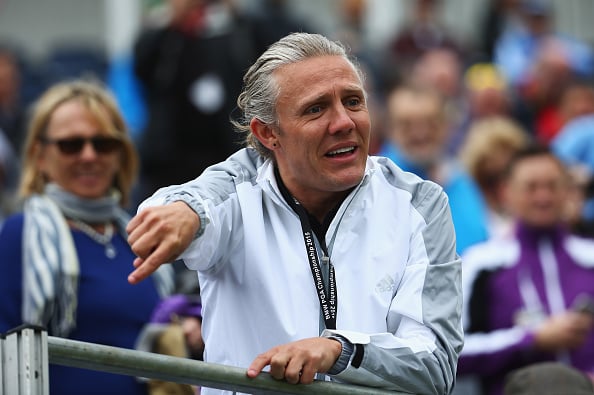 The former footballer is always keen to try and re-live magic moments in the JAR Arena located in the Soccer AM studio car park.

The former Wigan and Fulham midfielder has had mixed success when trying to re-create goals on Soccer AM. Goals such as Tony Yeboah’s famous strike against Liverpool proved too difficult for ‘the bulldog’ in the past.

However, Bullard has successfully managed to recreate a collection of world class goals as seen in the video below.

Bullard even managed to recreate one his best ever goals form his time at Wigan at the end of the video.

Here is some background behind some of the re-done goals.

Thierry Henry’s second season with Arsenal in 2001 was his breakout season. Fresh off the back of winning the European Championship in 2000, the Frenchman had turned into one of the best players on the planet by 2001.

He scored 17 goals in the Premier League as Arsenal battled it out with Manchester United for the title. His goal tally included a magnificent strike against United, Henry flicked the ball up with his back to goal and then turned and volleyed passed the helpless Fabian Barthez.

The Gunners fell short finishing second that season but the frustration of this helped turn Arsenal into one of the best teams in the early 2000’s.

Paul Gascoigne was one of the worlds greatest players around the 1990’s, his performances at ‘Italia 90’ lit up the footballing world.

The following season Gascoigne continued to impress and made the PFA team of the year. Gascoigne also inspired in Spurs run to the FA Cup final.

A London derby in the semi-final was a momentous occasion and Gascoigne scored a brilliant freekick to mark the fixture. The freekick was the first in a 3-1 win as Spurs made it to a domestic cup final.

Sadly, for Gascoigne the final would not be a great day for him as he ruptured his cruciate ligaments in his knee. This injury heavily impacted his career.

The Premier League Hall of Famer scored many great goals in his career but this strike might have been his best.

Alan Shearer was coming towards the back end of his career in 2001, but the record goal scorer in the Premier still had the ability to score goals.

Many consider Shearer’s goal as the greatest Premier League goal of all time. The strike helped to spark a comeback as before the goal they trailed Everton 1-0.

What goal do you think Jimmy Bullard should re-create next? Let us know @SPORF on Twitter