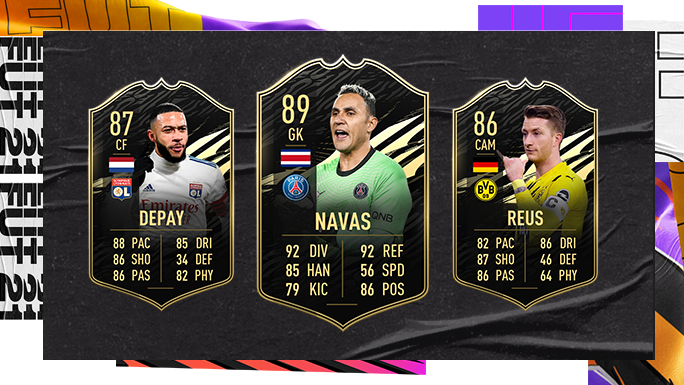 Time flies when you’re having fun and we can’t believe we’re already at TOTW16 in FIFA21!

Speaking of the game, have you voted for Team of the Year yet? If not, you can vote here and influence who will feature in this year’s edition.

Onto Team of the Week and there’s some really nice cards in ahead of what could be a few extra cards this week due to the Weekend League Plus objectives.

Antoine Griezmann, Keylor Navas and Marco Reus are the 3 standout cards from the team but here it is in full:

His 3rd special card of the year following on from his 1st in-form and Player Moments SBC cards, Depay is rewarded for his 3 goals and 1 assist in 2 games for Lyon.

This version has similar stats to that Player Moments card so expect a similar price or just lower.

With the influx of good Dutch cards recently, see Arjen Robben Flashback and Showdown Sean Kiaiber/Donyell Male, this could be a great option for your team.

Part of the Headliners 1 team, this card will be the first of the headliners to be bumped up in rating.

Coming in at 85 means his Headliners card will now be an 86 overall and close to the Gullit gang.

A very good option for Bundesliga teams ahead of Team of the Year later this month.

He’s a bit off that standard yet but he’ll be a good option to pick up as a superb with his 4* skills and 5* weak foot.

We’re expecting a SPFL Squad Foundations objective/milestones in the future so this is definitely worth picking up.

What do you think of TOTW16? Let us know on Twitter, @SPORF!