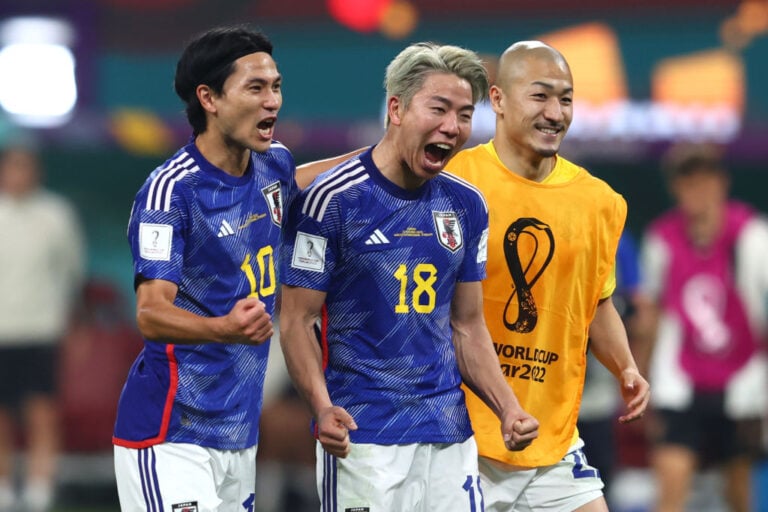 Qatar 2022 had yet another shock result as Japan defeated four-time champions Germany on day four of the World Cup.

Hansi Flick’s side will be on the back foot in Group E after the loss, especially with Spain’s dominant start in the other group match. The 2010 world champions thrashed Costa Rica 7-0 yesterday – a clear statement of intent.

Elsewhere, a pair of tense encounters kicked off the Group F excitement.

Morocco and Croatia played out the third 0-0 of Qatar 2022 as neither side could gain an advantage at the Al Bayt Stadium.

During a first half lacking in clear-cut chances, Spurs’ Ivan Perisic went close with a speculative effort that fizzed over the bar. Then, just before half-time, Tunisia keeper Bono managed to block Nikola Vlasic’s close-range chance.

Following the interval, both sides had an opportunity to score, with Morocco feeling they could have earned a penalty. However, the referee waved away protests that the ball hit Dejan Lovren’s arm.

Both defences ultimately proved too strong and, with opportunities scarce, the game ended goalless.

For Morocco, this is a positive start to their World Cup campaign in a competitive group. Meanwhile, Croatia may feel like this is a missed opportunity if they intend on finishing top of Group F.

After a drab opening to day four, the World Cup came alive again with a stunning result in Doha. Germany, widely considered one of the main tournament protagonists, suffered defeat to Japan.

To begin with, it looked like everything was going right for Germany. Consistent pressure on the Samurai Blue’s goal culminated in David Raum earning his side a penalty. Ilkay Gundogan took the responsibility, calmly despatching the spot-kick.

However, Japan showed their threat on the counterattack; before the penalty, they had a speedy counter goal ruled out for offside.

In the second half, Die Mannschaft continued to make chances. Serge Gnabry had three shots saved in the space of a minute, with Shuichi Gonda impressing in Japan’s goal. Unfortunately for Hansi Flick’s side, these wasted opportunities were costly.

On 75 minutes, Japan’s substitutes helped them get an equaliser. Former Liverpool player Takumi Minamino fizzed in a cross, which Manuel Neuer could only parry. Ritsu Doan then followed in, firing home to level the game.

Japan found themselves in the lead just eight minutes later. A long ball dropped to substitute Takuma Asano, who bared down on Neuer’s goal. As the angle got tighter, Asano unleashed a rocket shot that flew into the roof of the net.

Germany could not get the breakthrough as Japan held firm to claim a memorable 2-1 win.

Luis Enrique’s side signalled their intent at the 2022 World Cup with a comprehensive 7-0 win over Costa Rica.

The CONCACAF country looked well out of place in what felt like a training session for Spain. Costa Rica had just 18% possession, whilst also failing to register a shot.

Within half an hour, La Furia Roja had the game wrapped up. Dani Olmo opened the scoring after ten minutes, before Marco Asensio turned home a Jordi Alba cross. Ferran Torres then added the third from the penalty spot.

Spain’s one-way traffic continued after the interval. Barca star Torres added his second of the game, squirming a shot underneath the helpless Keylor Navas. Unfortunately, the Costa Rica keeper had to pick the ball out of his net a few more times yet.

Reigning Kopa Trophy winner then became the youngest World Cup scorer since Pele thanks to a smart volley. This looked to have completed the scoring – but Spain added further insult to injury. Carlos Soler dispatched the sixth via a rebound before Alvaro Morata claimed a confidence-boosting seventh.

With the win, Spain took control of Group E after Germany’s defeat. They will still hope to avoid defeat to their European counterparts on Sunday, though.

Canada still could not break their World Cup scoring duck during a 1-0 defeat to Belgium to round out day four.

They even had the perfect opportunity to get on the scoresheet within the opening ten minutes. The Maple Leaves won a penalty, but talisman Alphonso Davies failed to convert it.

Towards the end of the first half, Belgium made Canada pay for their missed chances. A long through ball from defence fell to Michy Batshuayi. Despite missing opportunities throughout the game, the forward was clinical here as he blasted the ball home.

After falling behind, Canada tried everything to find an equaliser. Tajon Buchanan spurned a chance over the bar, which really summed up Canada’s quality of finishing.

The second half saw more of the same. Richie Laryea slashed a shot wide, while Cyle Larin also had a header saved. Ultimately, Canada could not beat Thibaut Courtois, despite taking a staggering 22 shots.

Belgium may not be too happy, either. Although they took home three points, the Red Devils were lucky to not concede against their energetic opponents.

Both Belgium and Canada will look for improved performances in their next game, against Morocco and Croatia respectively.

Ranked: the five worst kits at the 2022 World Cup