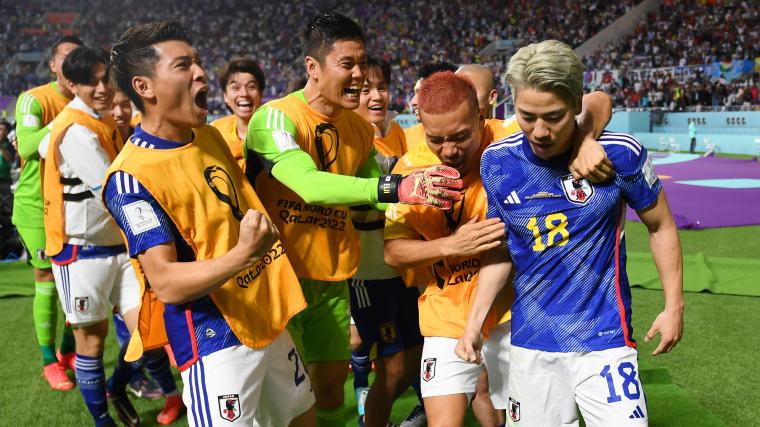 The match saw Japan claim victory over Germany for the first time in the two teams’ history.

It also marks the second time in a row that the latter have lost their World Cup opening game. Fans will remember that Germany lost 1-0 to Mexico in the 2018 Russia World Cup.

First-half: Germany go 1-0 up thanks to VAR

The first goal of Japan and German’s opening group E game came after Shuichi Gonda of Japan fouled David Raum of Germany, resulting in a penalty granted by VAR.

The decision saw Manchester City’s Ilkay Gundogan slotting the ball just to the left of the centre in the 33rd minute.

Five minutes of added time was played in the first half of the Germany vs Japan match, with the fourth seeing a goal being tapped home by Chelsea’s Kai Havertz.

The goal in question however was eventually disallowed after a VAR decision deemed Hevertz to be offside.

Germany ended the first half of their opening Group E game 1-0 up.

Sub changes at half-time saw a change in Japan

While Germany didn’t make any changes at halftime, the Blue Samurai substituted Kubo for Takehiro Tomiyasu and also changed the formation to include five at the back.

In the 68th, a double sub came from the German camp. Gundogan, who scored Germany’s leading goal and Thomas Muller were replaced by Leon Goretzka and Jonas Hofmann, respectively.

Following the double sub from Hajime Moriyasu, Japan was seemingly revitalised. They won a corner in the 69th, which saw the ball being dropped at the feet of Kou Itakura. However, the defender made the mistake of passing to Neuer instead of shooting himself.

Before another failed attempt at goal, Ao Tanaka was replaced by Ritsu Doan. Three minutes later Hiroki Sakai was subbed out for Takumi Minamino.

Second-half:Japan score their goals of the game

Within seconds, Minamino rapidly sent the ball down the inside-left channel, where Neur passed to Doan. The latter slotted the ball into Germany’s net from the six-yard mark in the 73rd minute.

From then, it was Japan’s game. Germany frantically made a double substitution in Jamal Musiala and Hevertz for Niclas Fullkrug and Mario Gotze. However, it wasn’t enough to stop Japan from scoring again in the 83rd.

Asano hammered the ball home from an extremely tight angle at the right-hand of the six-yard box, scoring Japan’s second goal of the game.

While Germany attempted to respond with close calls in the seven minutes of added time, their shots came to no avail. This is also despite them having nine on-target shots throughout the whole game, and dominating with 74% of possession.

The match marks Germany’s first loss at the 2022 World Cup. The match against Japan is also the first time the former has taken a loss when leading at half-time at a World Cup since 1974!

Victorious nation Japan now top Group E with 3 points, while Germany sits in dead last with 0 points. This is fantastic news for the former, but not so much for the latter when their next World Cup fixture is against Spain.

To put that into perspective, the last time Germany and Spain met was in November 2020. The match saw Germany suffering a humiliating defeat of 6-0 to Spain.

Japan will face Costa Rica on Sunday November 27, while Germany square up against Spain at a later time on the same date.