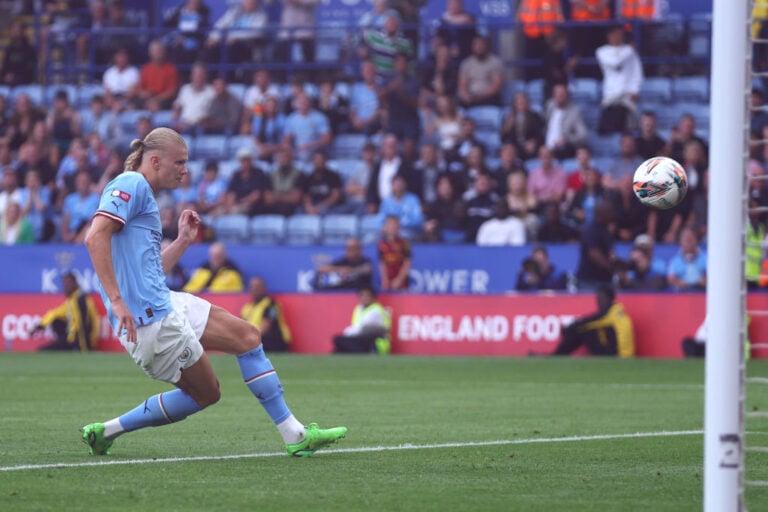 Manchester City midfielder Ilkay Gundogan had an awkward question to deal with when a reporter asked him about the impact Erling Haaland could have had on City’s Champions League exit last season. But he controlled the situation in the manner of a midfield general.

The Norwegian forward is the marquee signing at the Etihad this summer. Haaland also headlines Pep Guardiola’s revamp to his squad following 2021/22. Club veterans Raheem Sterling and Fernandinho have both left the club. Also out the exit door were Gabriel Jesus and Zinchenko, who joined Arsenal.

City have shelled out some money in order to replenish the squad. As well as Haaland for £51 million, City spent £50 million to secure Kalvin Phillips from Leeds. Additionally, January signing Julian Alvarez finally links up with the squad, coming from River Plate. Finally, goalkeeper Stefan Ortega arrives at the Etihad on a free transfer.

With several fresh faces, there may be some growing pains when it comes to adding the new signings to the team. In addition, City played just two pre-season friendlies ahead of the Community Shield.

Pep Guardiola’s side was second-best as Liverpool took a 3-1 victory in the Community Shield. The Reds looked sharper overall and drew first blood in the first meeting between the two rivals this season as a result.

For City fans, the main concern would be the disconnect between Haaland and his supply. There was some frustration as the forward made many runs in behind, but the City philosophy meant that the pass often did not arrive. Furthermore, when he had the chance to score, Haaland missed some big chances.

In the first half, Haaland stretched to get on the end of a cross. However, he arguably went with the wrong foot, making awkward contact and ultimately letting a chance go begging. Late on in the game, the Norwegian missed a sitter.

Already 3-1 down, the ball rolled to Haaland in the box for what seemed an easy finish. Somehow, the big forward smashed his effort off the bar, meaning he has to wait before opening his competitive Man City goal account.

As ever, social media was not kind to the big forward. Many claimed that he cannot do it in the Premier League, despite never having played a game in the competition.

Meanwhile, other fans are still wary of the potential that Haaland has with regular service, believing that City could become a juggernaut.

Despite ending 2021/22 on a high with a Premier League title, many cannot forget the manner in which Man City exited the Champions League. Real Madrid knocked out City at the semi-final stage in the most exceptional circumstances.

The Citizens were just moments from the final until Rodrygo scored two goals past the 90th minute to force extra time. City then lost in the additional thirty minutes via a Karim Benzema penalty.

In an interview with ITV Sport, a reporter asked Ilkay Gundogan if having Erling Haaland in the Man City side would have made any difference. He asked for a yes or no answer.

“Can I answer it differently?” laughed Gundogan. “I mean, honestly, I would say no. Because I don’t think we’ve lost the game because we didn’t have a physical striker. No, that’s not what I believe.

After watching the Community Shield, it is fair to say that the Citizens are not used to playing with a traditional number nine. Haaland is a phenomenal talent, though; if and when he gets used to the playstyle, goals are almost guaranteed.