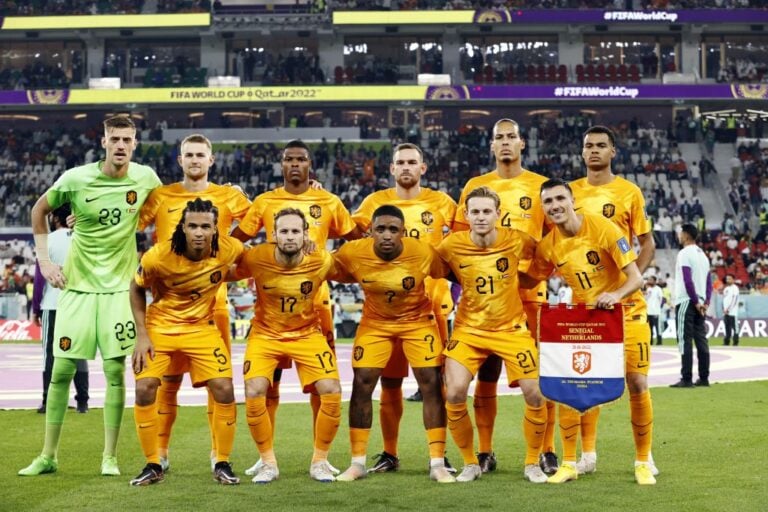 On the face of it, designing a football shirt is a simple process. Despite this, some brands still churn out jerseys that prove divisive, to say the least. Unfortunately, there are some such kits at the 2022 World Cup; here are our five least-favourite that are in Qatar.

As ever, these are just opinion, and you may actually love the shirts we pick! There is nothing wrong with that at all. But, for us, these kits are not quite at the level of the others at this year’s World Cup.

A complete marmite of a kit, the first entry in our list is either loved or hated. Carrying the nickname “the Red Devils”, Belgium’s flame-inspired shirt makes sense. But that does not mean it is nice.

While the main element of the shirt is a plain red colour, the true controversy comes from the sleeves. The sleeves have a black base colour and complimenting red Adidas stripes. But rising from the cuffs are some 2D graphic design flames. Why? When did primary school disco shirts come back into fashion?

This fire graphic continues down the kit, where the socks also have a lick of flame. Meanwhile, the shorts are a simple black with red trim.

Ultimately, this kit will divide opinion every single time Belgium take to the pitch in it. However, if they have an underwhelming tournament, this shirt could go down as an all-time stinker.

With the amount of effort they put into other nations’ kits, it looks as if Nike ran out of time when it came to Canada. And, as it turns out, they did. Canada are the only country heading to Qatar which do not have a new strip for the tournament.

As a result, the Great White North unfortunately have a not-so-great white away kit. It is not a particularly egregious shirt, but not particularly inspiring either.

Plain white shorts and socks combined with a plain white shirt make the Maple Leaf’s away effort. In addition, a black Nike logo and the Canada crest sit on either side of the chest as the only other notable features.

It seems that Alphonso Davies and co. will have to provide the spark for Canada, as the kit will not.

In their first World Cup for eight years, the Netherlands could have done better with their kits. Unfortunately, Nike have another entry onto our list thanks to their odd home shirt.

The Oranje are bizarrely wearing a kit which does not look particularly orange. Instead, Nike have given them a “laser orange” strip – which makes a garish, reflective-like colour. The weird shine comes from a “dancing swirl” design, which takes inspiration from a lion’s mane.

Away from the ugly colour, the Netherlands’ home shirt uses Nike’s generic 2022 template. Black logos and trim seek to take the edge off of the strange pattern, but it is to no avail.

One of many kits suffering from Puma’s weird template, Switzerland’s is arguably the worst of the lot and second on our list of worst World Cup kits.

Featuring a shield-like number placeholder, the German manufacturer have taken an unorthodox style to the strips. Unfortunately, this has not proved popular.

Running through the middle of the white kit are some feint, microwave-style lines which add… not a lot. Then, the red number box, featuring the Swiss crest and flag, does little to enhance the kit. Red Puma logos are on both the shirt and shorts – adding a dash of colour on the all-white strip.

So, whilst being a bit ugly to look at, the Swiss kit also suffers from being slightly boring.

Puma have just not had a great World Cup when it comes to their kits. Ghana, Senegal, and Serbia all have shirts that would not have looked out of place on this list. Sorry Switzerland, you are number two.

Again – this is just our opinion; you may disagree with our choices!

Finally, at number one on our list of the worst 2022 World Cup kits is the Cameroon away shirt. But honestly, it could have been any of their strips.

One All Sports, arguably one of the smaller brands at the tournament, are the unfortunate makers of this offering. The white away shirt takes our number one spot here, and it is poor.

The most notable feature is the angular collection of thick green stripes, which come down from the shoulders across the front of the top. Cameroon’s flag then features on the sleeve cuffs, complete with the gold star.

A tall collar completes the particularly unfashionable white shirt. Other than the way it looks, though, there are other issues with the One All Sports kit.

Per Footy Headlines, the quality of the shirt is questionable. There is uneven stitching, plus the logos on the kit are out of line in the official photos.

Overall, considering the weak design and poor quality, this Cameroon alternate strip is the one that we think will be the worst on show in Qatar.

However, this is all subjective. Which shirts do you like and dislike? Why not get involved and tell us your favourites?