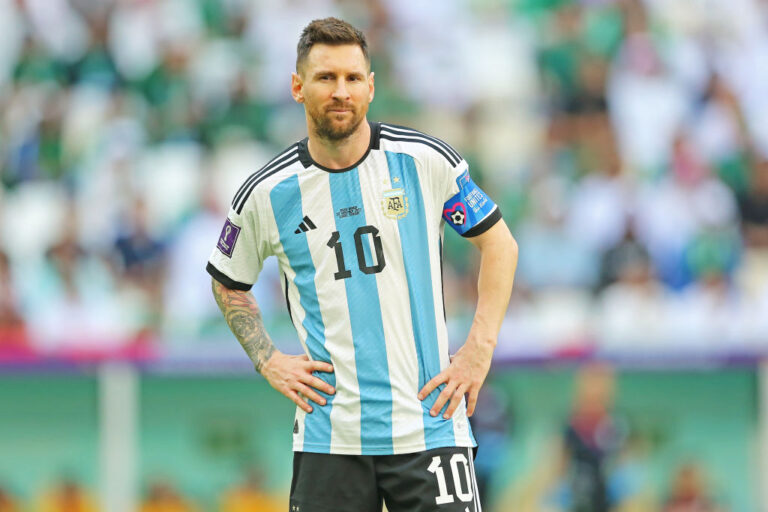 Argentina kicked off their World Cup campaign in the worst way possible yesterday, falling to a shock 2-1 defeat against Saudi Arabia. Because of their ‘favourites’ status heading into Qatar 2022, we ask the question: How many eventual World Cup winners also failed to win their opening game?

Their disappointing encounter against Saudi Arabia started perfectly. Following a VAR check, Argentina received a penalty for some wrestling at a corner. Lionel Messi seized the opportunity to take the lead, casually rolling the ball home.

From here, the Albiceleste continued to threaten Saudi Arabia’s goal. However, the offside flag continually thwarted their hopes of doubling their advantage.

Argentina had the ball in the back of the net four times, but Messi and Lautaro Martinez saw three strikes ruled out for offside.

After such a dominant first half, many expected the same one-way traffic after the break. But Saudi Arabia had other ideas. Just three minutes into the second half, Saudi Arabia equalised. Saleh Al-Shehri got the important goal, turning the ball past Emi Martinez from an acute angle.

Incredibly, five minutes later, a moment of genius from Salem Al-Dawsari gave Saudi Arabia an improbable lead. The winger beat three Argentina defenders before rifling a shot into the far top corner from the edge of the box.

Clearly shell-shocked, Argentina looked disjointed as they searched for a way back into the game. Unfortunately for Messi and co., though, the Saudi defence stood firm and absorbed the pressure.

A scary collision between Saudi keeper Mohammed Al-Owais and his defender, Yasser Al-Shahrani, brought a heap of added time. Despite this, the Gulf Kingdom held on to secure a memorable victory.

This defeat is a horrific start for an Argentina side considered one of the favourites to win the World Cup. And, unfortunately, history does not bode well for Albiceleste’s dream of a third title.

It turns out just three eventual winners have failed to take victory in their first game.

Argentina will hope to mimic 2010 World Cup winners Spain, as they are the only nation in history to win the tournament after losing their opening match.

That’s right, the iconic side containing the likes of Xavi, Iniesta, and David Villa suffered a 1-0 defeat to Switzerland.

Gelson Fernandes got the only goal of the game in the 50th, bundling the ball home after a melee in Spain’s penalty area.

However, this surprising defeat did not dent Spain’s tournament hopes. They bounced back with wins against Honduras and Chile to finish on six points. These two victories helped them finish top of Group H on goal difference.

In the knockout stage, Spain’s tiki-taka style proved too much for every opponent in their path. Despite dominating possession, though, La Furia Roja did not score a lot.

From the round of 16 through to the final, they won every game 1-0. Portugal, Paraguay, and then Germany all fell by just the smallest of margins to the Spanish squad.

Andres Iniesta scored Spain’s all-important goal in the final as they defeated the Netherlands.

Regardless of how they won, Spain’s ability to come back from an opening-round defeat could provide Argentina with hope for 2022.

But Spain in 2010 is an exception to the norm. In general, you need to win your first match. Only two other countries have started a tournament without a dub before going all the way.

Italy managed to draw their first three matches ahead of lifting the trophy at Spain 1982. Even though they had the prolific Paolo Rossi leading the line, the Italians started their tournament with an underwhelming 0-0 draw against Poland.

Then, a pair of 1-1 ties versus Peru and Cameroon meant that Italy scraped through to the second group stage.

During the next round, though, the Azzurri turned on the style. Facing a pair of tricky matchups in Brazil and reigning champs Argentina, Italy took two wins from two. They beat Argentina 2-1 before knocking out Brazil with a 3-2 victory.

From here, Italy booked their place in the final thanks to a 2-0 win over Poland. Clearly, they had learnt from their 0-0 draw against the same opponent in the opening game.

With momentum building throughout the tournament, the Azzurri put in a brilliant performance to win the 1982 World Cup final. Three second-half goals proved the difference, as Paolo Rossi cemented his golden boot with the opener. Marco Tardelli and Alessandro Altobelli also got on the scoresheet.

Meanwhile, Paul Breitner got a consolation for runners-up Germany.

This World Cup victory made Italy the second team to draw their first game and win the tournament. The first nation to do so happened to be the team that won the 1966 edition.

Finally, hosts England won their sole World Cup in 1966 following a winless opening game. Just like Italy in 1982, the Three Lions drew 0-0 in their first fixture, with Uruguay earning a point.

However, unlike the victorious Italians of Spain ’82, England responded with two victories in their remaining group-stage matches. Sir Alf Ramsey’s side registered 2-0 wins over Mexico and France to reach the quarterfinals.

In the last eight, Geoff Hurst grabbed the only goal as England knocked out Argentina 1-0 at Wembley. Following this, in the semi-final, the Three Lions eliminated Eusebio and Portugal with a 2-1 victory. Manchester United legend Bobby Charlton got both goals in that game.

Most England fans know the story when it comes to the final. It took a trip into extra time, but England managed to claim the Jules Rimet Trophy thanks to a 4-2 win over West Germany. Geoff Hurst was the hero on the day; he scored the first, and currently only, World Cup final hat-trick. Martin Peters was England’s other scorer.

Despite their slow start, England managed to live up to expectations as hosts to bring football home for the first time.

Looking at Qatar 2022 now, and it is clear that Argentina have their work cut out. They definitely need to win their other two group matches against Poland and Mexico to ensure their path to the knockouts.

But if these three aforementioned winners have shown them anything, it is that claiming the trophy is still possible.