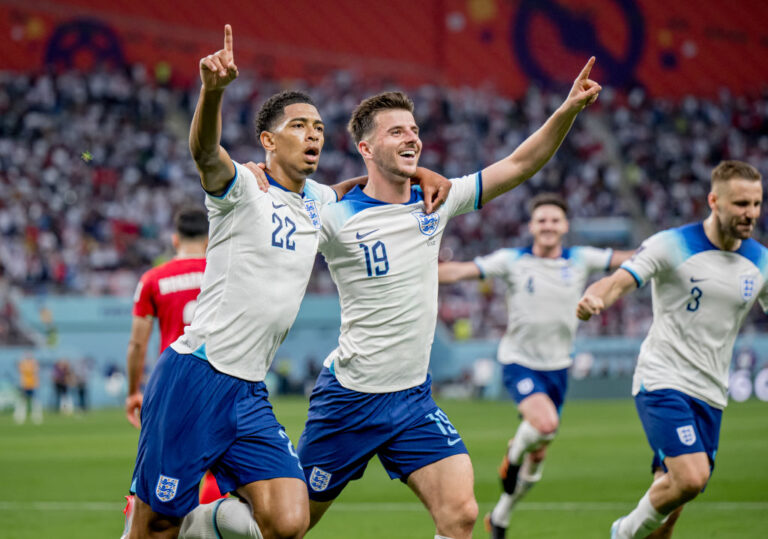 After taking three points in their first game, the Three Lions will look to make it two wins from two against the USA. Here is all you need to know, including the start time and where to watch, for England v America.

The United States, meanwhile, left their draw against Wales feeling a bit frustrated. They failed to capitalise on a dominant first-half display before captain Gareth Bale snatched an equaliser.

As a result, they will be hoping to take something from this match with England ahead of a must-win against Iran on matchday three.

England v USA of the past

These two nations have a World Cup past that may play on fans’ minds, too. At the 2010 World Cup in South Africa, England and America played out a 1-1 draw in Rustenberg.

Steven Gerrard gave Fabio Capello’s side an early lead, although a Rob Green gaff gifted the US a goal. In a frustrating game for England, America celebrated it like it was a win.

But, anyway, that is all in the past. At Qatar 2022, the two nations will be looking to take the win in their encounter.

Well, the good news is that you will not have to miss any work to watch this one. The start time for England vs USA is 7 pm UK time on Friday 25 November.

So, it will make for a cracking start to a weekend full of further football action.

How can I watch the match?

In the UK, ITV1 will be showing this particular England World Cup game. You do not need to pay to watch this game as a result.

In addition, an HD channel is also available for the England vs USA match. On the majority of Television providers, such as Sky, Freeview, and Virgin Media, this is number 103.

Build-up to the game begins on ITV 1 at 6pm, giving you an hour to raise excitement before kick-off.

Now you know where and when to tune in, why not consider which players to look out for?

With two goals in his first World Cup appearance, Saka stands out as the dangerman for Friday’s game. His pace and willingness to take players on should cause problems for the US defence. Fulham and US defender Antonee Robinson may have his hands full keeping Saka quiet.

Additionally, Jude Bellingham will likely be a catalyst for another strong England performance. As well as grabbing his first-ever England goal, Bellingham was instrumental in the Three Lions’ win.

His driving run was a key element to Raheem Sterling’s goal. His through ball also helped set up England’s sixth.

The Dortmund midfielder’s energy and quality in possession will be vital against America’s high-pressing team.

There are players on the opposition that can cause problems, though.

The USA: ones to watch

Although an easy choice, USA No.10 Christian Pulisic is the player that could do some damage to England. Pulisic is a familiar opponent to the Premier League players in England’s squad – but he is anything but predictable.

The winger picks up the ball in a variety of positions, demonstrated by his run from midfield to set up America’s goal vs Wales. Any attack that the USA builds appear to go through the Chelsea man.

Meanwhile, mopping up possession loss is Leeds’ Tyler Adams. The midfielder had a game-leading six tackles in the US’ first game, with two interceptions to go alongside.

America’s captain will have to be at his best to break up England’s attacks; Adams could be in for a very busy evening.